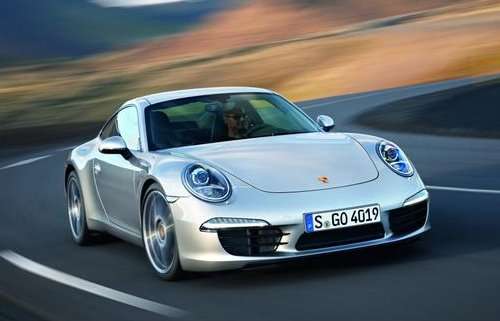 One of Porsche’s premiere models, the 2012 911 Carrera S, known worldwide for it’s hot performance, is now getting hotter thanks to a fault in the fuel line.
Advertisement

How would you feel if you spent $96,000 on a sexy, exotic sports car only to have it burst into flame as you drove it – a little hot under the collar maybe?

Porsche is unaware of any accidents or fires that have resulted from this fault, according to a post by the Associate Press.

Reportedly, Porsche has stated the problem results when a coolant conduit touches a fuel line connector, causing it to loosen. Dealers have been instructed to replace the line unless they can determine the connections are firm. Then a spacer will be added to make sure the coolant and fuel lines maintain a respectful distance from each other.

You might say Porsche has issued a restraining order.

The fire associated with the Chevy Volt only occurred two weeks after a test impact while it was parked in an agency lot. That’s a lot different than catching fire while you’re rolling down the road.

What if the driver paniced and bailed out, letting the 2012 Porsche Carrera S roll aimlessly into whatever happened to be in its path. The results could be catastrophic, to say the least.

Something similar happened to my late wife’s car some years ago, though she managed to stop the car near home and exit it. The carburetor of the K-car had been replaced and the fuel line wasn’t truly secured. When it came off and spewed gasoline over the hot engine it caught fire. It was too hot to get near it and no extinguisher was handy. The fire melted every hose and wire on the engine leaving it a smoking brick of metal – a total loss, but then it was only a K-car.

A 2012 Porsche Carrera S would be a lot more difficult to cope with, don’t you think?

Wouldn’t you be happier with just a small electrical fire in a car the gas had been drained from, rather than a flaming sports car on its way to someone’s house or a nearby school bus.

Of course Porsche will correct the problem, so that is an unlikely happenstance. All the same, would you pay $96,000 for a rolling cherry bomb? Maybe, if it had a 911 Carrera S badge on it.

Anonymous wrote on March 26, 2012 - 10:25am Permalink
I noticed in your report that there have been no incidences of fires with the new Porsche 911, however, this report came from the National Highway Traffic Safety Administration. Thus, I'm sure your aware that this is a precautionary measure to correct a potential problem. However, the fact that you are downplaying the fire problem with the Obama Motors Chevy Volt by comparison is amateurish on your part. rbrt

Panasonic Updates Profit Forecast, Noting How Much Tesla Batteries Help The Jump
2022 Porsche 911 GT3 Laps Nurburgring in 7:04 With Journalist Behind The Wheel
END_OF_DOCUMENT_TOKEN_TO_BE_REPLACED