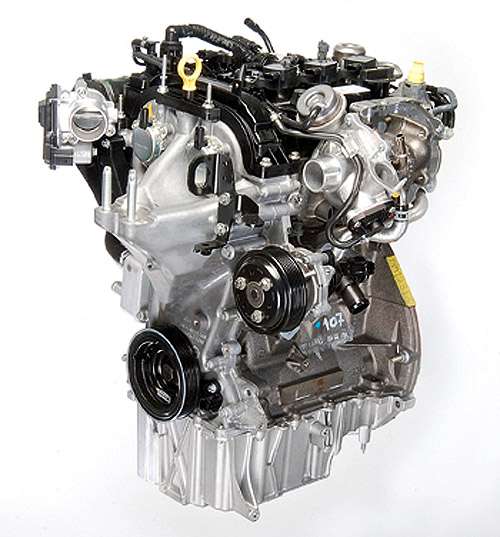 Only 10 technologically advanced products are selected by Popular Mechanics each year as having the most impact on the world we live in. Other than this newest member of the growing EcoBoost engine family, a new type of camera and an affordable printer, said to make 3D impressions, received acknowledgment, along with several other high-tech devices.

Though the 1.0-liter EcoBoost is among the smallest-displacement engines Ford has ever built and the brand’s first ever three-cylinder, it’s no wimp in power or refinement.

Already in use in Europe, this 1.0-liter EcoBoost engine can produce up to 125 horsepower and is chock full of technical innovations. With impressive acceleration, it’s still one of the smoothest, quietest engines in Ford’s global lineup.

“We placed the bar incredibly high when we set out to design this engine,” said Joe Bakaj, Ford vice president, Global Powertrain. “We wanted to deliver eye-popping fuel economy, surprising performance, quietness and refinement – and all from a very small three-cylinder engine.

Having already been named International Engine of the Year by a jury of 76 journalists from 35 countries, the 1.0-liter EcoBoost engine is available in Europe in the Focus, C-MAX and B-MAX models. It features a split cooling system, offset crankshaft, variable oil pump and other progressive innovations.

“The team responded to this seemingly impossible challenge with some really exciting innovation,” he added. “We are thrilled Popular Mechanics has recognized the 1.0-liter EcoBoost engine for a Breakthrough Award.”

Eventually, Ford will offer the 1.0-liter EcoBoost engine in North America as well. It features turbocharging with direct fuel injection plus variable valve timing to maximize the performance of a smaller, downsized engine while achieving a 20 percent gain in fuel economy.

“We are once again excited to recognize this year’s list of incredible honorees for their role in shaping the future,” says James B. Meigs, editor-in-chief of Popular Mechanics. “From a featherweight metal to the world’s fastest and most electrically efficient supercomputer, this year’s winners embody the creative spirit that the Breakthrough Awards were founded upon.”

It is a highly significant honor for the engine engineers at Ford and one that will surely get the notice of the general public. The 1.0-Liter Ford EcoBoost engine is likely to be available in the C-Max and perhaps Focus models next year.

Tesla Contemplates A New Strategy for China Retail even As Sales Boom
Jay Leno on Elon Musk & EVs: “I Think He Should Get ... Credit"
END_OF_DOCUMENT_TOKEN_TO_BE_REPLACED