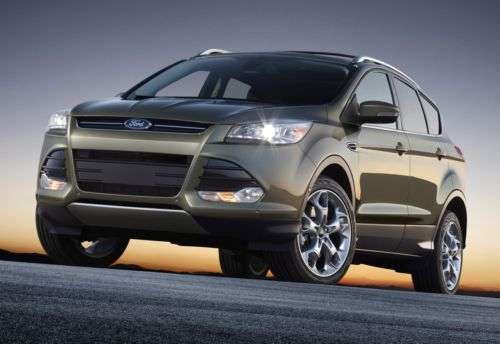 When the next generation of the Ford Escape is revealed this week at the Los Angeles Auto Show, it will come with bright new features, three different engines, including two EcoBoost versions, innovative new technology and what Ford thinks will be the best fuel economy in its class.
Advertisement

This is coming following the model’s best year ever with over 200,000 sold in 2010 and eight out of 10 months this year with sales increases over last year.

“We call our all-new Ford Escape the ‘Smarter Utility Vehicle’ because it offers the strengths that customers today really value – fuel economy, versatility and new technology that makes driving and living with the vehicle easier and more fun – all wrapped in a sleek, more modern design,” said Derrick Kuzak, group vice president, Global Product Development. “Ford understands that more people every year are looking at vehicles like Escape, and we want to give them even more reasons to buy.”

In fact, according to Ford’s market research, over 60 percent of everyone buying a car next year will be looking at either a midsize sedan or a small SUV. “Escape is America’s best-selling utility vehicle, and the Ford team has worked hard to make sure we deliver even more of what small SUV owners really want,” Kuzak said.

The highlight of the new features is the way the rear door opens when you simply make a kicking motion beneath the bumper – as long as the smart key is on your person. This way with bags of groceries or other purchases filling your arms you can open the cargo area without fumbling for a key fob.

A network of 25 sensors and data inputs, including speed, accelerator status, steering wheel angle and road conditions, assess torque and tracking to allocate power to the wheels as needed 20 times faster than the blink of an eye. Paired with intelligent 4WD the system adds or subtracts torque according to conditions through an electromagnetic clutch.

Consequently, anyone whose heart is set on hybrid technology from Ford will have to wait for the release of the C-Max next year.

Available engine choices include the updated standard 2.5-liter paired with a SelectShift automatic six-speed. This motor produces 168 horsepower and 167 lb.-ft. of torque, while getting over 5 percent better mileage and low-end torque for enhanced performance.

The gearbox features a new torque converter for smooth shifts and even better fuel economy. Gear ratios have been revised for a balanced feel in all driving situations.

The 1.6-liter EcoBoost engine develops 173 horsepower and 177 lb.-ft. of torque. This motor is the mileage leader for the 2012 Ford Escape with up to 5 mpg better than the previous model. The EcoBoost engines add twin independent variable camshaft timing (Ti-VCT) to the motor's direct injection and turbocharging.

The 2.0-liter EcoBoost produces 237 horsepower and 250 lb.-ft. of torque providing a towing capability rating of 3,500 pounds when properly equipped.

In addition, the 2012 Ford Escape’s active grille shutter system, on all models with the 1.6-liter EcoBoost and 2.5-liter four-cylinder engines, helps to create the new Escape’s 10 percent improvement in aerodynamics. Grille slats are open when extra engine cooling air is required, as in low-speed stop-and-go driving. On the highway at steady speeds, the grille slats automatically close, improving aerodynamics and efficiency.

Furthermore, SYNC with MyFord Touch has been upgraded with an easier to understand display and larger type, making managing and controlling various systems and features through voice commands, steering wheel functions, touch screens, buttons and knobs freindlier. The new look makes phone, navigation, entertainment and climate control much easier to use.

The 2012 Ford Escape will even help you park with active park assist. By merely pressing a button, the system will find an available parking space and automatically steer into the parallel space. The driver need only control the gas and brake pedals

The important new technology of a Blind Spot Information System (BLIS) has also been included with a cross-traffic alert. BLIS sounds an alert whenever a vehicle enters a blind spot. Cross-traffic alert warns if traffic is detected from the sides, for example as when backing out of a parking space.

The 2012 Ford Escape is also the first Ford SUV with technology that automatically slows the vehicle when cornering too fast (Curve Control) or helps accelerate through a turn (Torque Vectoring Control).

Comfort, versatility and fuel efficiency characterize the new Escape, but it doesn’t stop before adding a considerable level of environmental consciousness. The carpets in each model are made of 25 plastic beverage bottles. Most of the gaskets in the 2012 Ford Escape are made from recycled tires. Even the seats utilize foam made from soybeans, which helps to lower emissions at the factory. Recycled nylon and denim go into the headliner. A full of 85 percent of the SUV is recyclable at the end of its useful life.

Finally the 2012 Ford Escape features more cargo space than last year’s model with 68.1 cubic feet of room behind the first row and 34.3 cubic feet behind the second row. The rear seats fold flat with the touch of a button – the head restraint folds down to allow this via a handle on the seat. There is also an available two-position load floor, allowing either maximum luggage volume or a simple flat floor.

Following this week’s world debut in Los Angeles, the 2012 Ford Escape will be revealed in Europe as the Ford Kuga, Small SUV sales there have increased by 200 percent since 2000. The European launch will be at the Geneva Motor Show in March with unique powertrains and features. The Chinese market will get its first look at the all-new Kuga next spring.

For Some Former Daimler Managers Daimler Is Authority, While Tesla Is Like a Startup
How Daimler Unintentionally Subsidizes Tesla Giga Berlin
END_OF_DOCUMENT_TOKEN_TO_BE_REPLACED