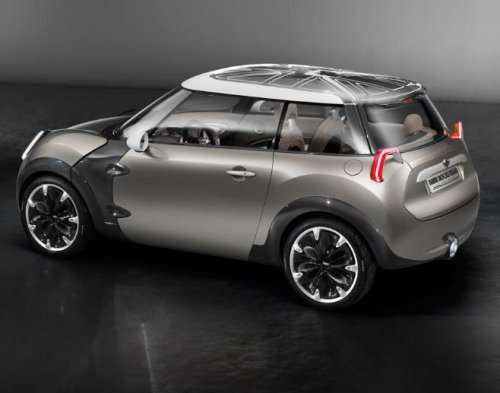 More info revealed on the Mini Rocketman ahead of Geneva

The essence of the MINI Cooper has been distilled into the Mini Rocketman – an awesome design that even when motionless looks like it could suddenly jump at any moment. It will first be revealed “in the flesh” at the Geneva Auto Show March 3-13.
Advertisement

Shorter than even the standard MINI Cooper hardtop at just over 11 feet long, the Rocketman has a new 3+1 seat configuration and three doors, ditching the even number concept in car design.

Since it is built around the core values of the MINI experience – namely functionality, economy, wicked design and radical agility – it should be a major thrill to drive.

A carbon composite frame is used to make the Rocketman exceedingly light – allowing for a propulsion system which, despite sprinting like a marathon runner and making roller coaster turns, can still deliver mileage over 75 mpg. Brilliant!

The seating arrangement is situation adaptable and can be configured for maximum fun for two, comfy seating for three, or slightly tighter accommodations for four.

This MINI has the kind of face you would expect from a short, squat robotic servant – though one whose prime directive is to please you. A white top, headlamp rings and egg-shaped rearview mirrors accent the light gray tone of the body.

The Rocketman has a split, lift up tailgate window and a pullout lower drawer for luggage and gear storage. Reportedly, inserts will even allow the transport of snowboards and other bulky sports equipment.

The car’s interior features leather covers and painted surfaces combined with armrests and trim strips made of special paper pressed and folded into shape. These are backlit by LED-powered fiber optics, while a light strip wraps around the interior generating a gracious ambience.

In addition to the articulated steering wheel, the Rocketman has a joystick positioned below the center speedometer, which controls navigation, entertainment and communication functions.

Further a trackball is integrated in the right-hand steering wheel spoke, which functions like an iPod in the selection of controls and scrolling through lists.

The navigation, communications and entertainment systems in the MINI Rocketman Concept are part of the MINI Connected in the current series of MINI cars. This advanced connectivity makes the car a mobile element of one’s lifestyle. Internet-based communications, integrated navigation and an expansive entertainment program help to maximize driving fun, comfort and safety.

When these cars beginning hitting the streets we expect novelty plates like EVAMINI and MCWALLE to be snapped up in states countrywide.

We can hardly wait to write a close-up of this cute, cutting edge vehicle when they come around for test-drives.