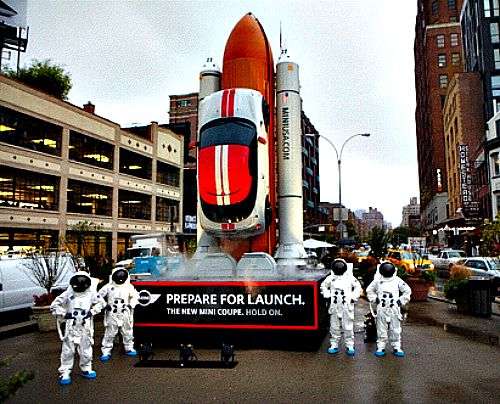 Mini Cooper Coupe launch going where no car has gone before

The Mini Cooper Coupe is the latest in the long line of vehicles well known for their movie and/or marketing stunts. Now they are going where no car has gone before with a Space Shuttle themed marketing campaign and a float that will be featured in the New York City Village Halloween Parade. The promotion is called “Prepare for Launch,” (with the tongue-in-cheek post script: ”Hold on!”).
Advertisement

For the campaign, the new Mini Cooper Coupe is upended like a space shuttle attached to its 30-foot booster rockets. The impressive float was assembled in New York’s Meatpacking district and will be on view today through November 1.

The Mini Coupe marketing campaign also has some astronauts in full Moonwalk regalia walking about the city to build a buzz and prepare the crowds for the floats appearance in the Halloween Parade. The tag line for the MINI Coupe, “Hold On.” speaks to the vehicle’s stunt performancew handling, as well as its sporty, easy to park and deliriously exhilarating nature.

“What better way to launch the fastest MINI yet than attach it to a rocket, in the greatest city during one of MINI’s favorite holidays,” said Tom Salkowsky, Manager - MINI USA Marketing. “The all-new MINI Coupe is all about performance that forces you to Hold On!”

The annual Village Halloween Parade, anticipating 80,000 participants this year, will take place just blocks away from the rocket display. MINI USA will have two MINI Coupe vehicles in the parade, accompanied by the afore-mentioned astronauts and other MINI team members to hand out goodies to some of the 2 million spectators. The parade will travel along 6th Avenue, from 7 to 10:30 p.m. and run from Spring Street to 16th Street.

So now the Mini Cooper has a big family to a call its own.