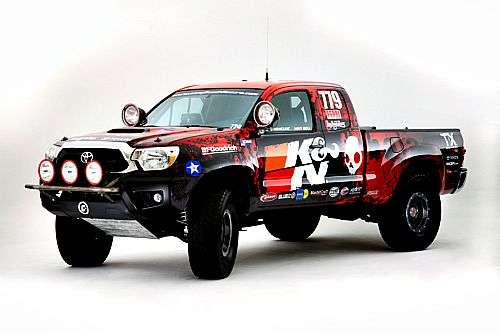 The debut of the Long Beach Racers Toyota Tacoma TRD Baja race truck is just one of the featured Toyota exhibits at the 2011 SEMA Show.
Advertisement

Inspired by the limited edition 2012 Tacoma TRD T/X TRD Baja Series coming next year, the Long Beach Racers Tacoma will compete in the 2011 Tecate SCORE Baja 1000 with former freestyle motocross star Andy Bell at the wheel. Currently starring in MTV’s Nitro Circus, Andy Bell will be on hand to talk about the Tacoma race truck and the upcoming BAJA 1000 at a press conference slated for Nov. 1 at 10 a.m. Pacific Time at the Toyota exhibit.

The race truck is the culmination of the applied efforts of Long Beach Racers, a group of Toyota enthusiasts who specialize in racing Toyota trucks in the forbidding desert off-road terrain of the Baja Peninsula. The truck is a current contender for the SCORE Stock Mini class championship.

It all sounds just like what you need to get out of Southern California’s Suburbia on most any summer weekend, no? All this and a few Twinkies and Red Bulls, that is.

In addition to competing at the BAJA 1000, the Long Beach Racers Tacoma can also be expected at the Off Road Expo, Supercross, Dew Tour, and 2012 SCORE races.