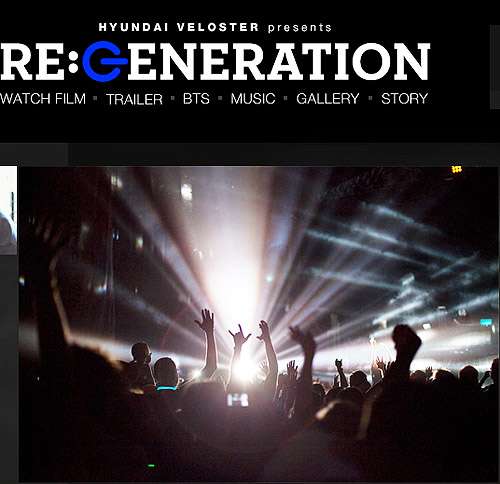 Hyundai won a bronze Cannes Lion award over the weekend at the 2012 Cannes Lions International Festival of Creativity in France for a theatrical promotion focused around the Hyundai Veloster.
Advertisement

The Recording Academy, best known for the GRAMMY Awards, was instrumental in connecting the DJs selected by the promotional team with GRAMMY winning artists in five different musical genres.

In the inaugural year of the award for best use or integration of music in the Branded Content and Entertainment Category, there were 800 submissions, trimmed down to only seven finalists, designated by 16 judges from 10 countries.

"We are honored and truly thrilled that the Cannes Lions International Festival of Creativity is recognizing the RE:GENERATION Music Project," said Steve Shannon, vice president of marketing, Hyundai Motor America. "Hyundai's intent with this project was to support the creation of original works of art that a youthful, creative audience would appreciate. And with great partners like Greenlight and the Recording Academy, we delivered on that objective in a way that authentically connected Hyundai to the artists."

Hyundai launched the 2012 three-door Veloster coupe with thematics surrounding how the sexy coupe redefines the way creative individuals experience driving, with music as their centerpiece.

Working with The Recording Academy, Hyundai and Greenlight came up with a unique concept in which five modern DJs were challenged to record an original track in a genre totally alien to them The result was five new electronic music tracks interlacing everything from country to classical. The process involved a multiple GRAMMY Award winner collaborating with each DJ to redefine the artist’s genre in their own unique style.

Five of the world's top DJs were selected for the project including Skrillex, Mark Ronson, DJ Premier, The Crystal Method and Pretty Lights. Then the whole process was documented by Oscar-nominated director Amir Bar-Lev.

The resulting documentary reveals the creative tension and the culminating performance of five original new tracks. The film was launched at Grauman's Chinese Theatre during GRAMMY Week, before an extended national theatrical release and several screenings at SXSW and Coachella.

"There were more than 32,000 entries this year at Cannes and this was the first year for the Branded Content and Entertainment Lions category," said Dominic Sandifer, president, Greenlight Media & Marketing. "Only an innovative brand like Hyundai could unite these partners and artists in a truly authentic way and we're proud to work with them."

The RE:GENERATION Music Project is available online exclusively on Hulu in the US and Japan, as well as on Vevo affiliated services in other international territories. It will make its world television premiere on Fuse Network later this summer.

Toyota's First EV Will Have a Name of BZ: Toyota BZ
First Videos From Inside The Boring Company's Las Vegas Loop
END_OF_DOCUMENT_TOKEN_TO_BE_REPLACED