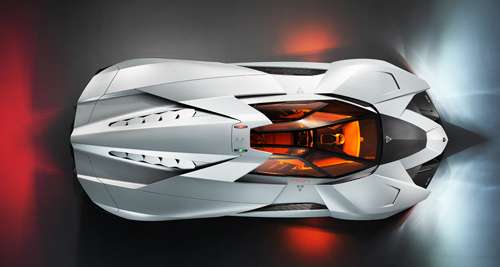 How Lamborghini is moving forward with the captivating Egoista

De Silva was the design director for the Volkswagen Group’s scintillating tribute to the legendary House of the Raging Bull’s first half century in existence. He also just happens to be Italian himself.

“I wanted to pay homage to and think up a vehicle to underline the fact that Lamborghinis have always been made with passion, and with the heart more than the head,” said De Silva.

To accomplish this the designer has created the ultimate expression of elitist indulgence – a one-seat vehicle for those who want only the most exclusive, expensive and unattainable things in the world. The embodiment of the model’s name, which translates to “selfish.”

“It represents hedonism taken to the extreme, it is a car without compromises,” added De Silva.

Before the Egoista was guided on stage by a sexy Italian model in a flight suit, a cinematic tribute to the new model illuminated nine big screens around the room.

When the Egoista entered the 10-meter tall event area, staged to resemble an airstrip, the dynamic roar of the V10 engine shook the entire structure, as Lamborghini President and CEO Stephan Winkelmann stepped out inviting De Silva to join him on the stage.

The Egoista boasts a 5.2-liter V10 engine with peak output of 600 horsepower; taken to the extreme of a single person vehicle like the Swiss fighter jet we reported racing a Nissan GT-R last week.

The cockpit will be custom built to fit the driver, ensconcing him or her in a modular unit that can be ejected in case of extreme emergency, like an Apache helicopter. Typical of the Lamborghini line, the Egoista was inspired from the world of aviation.

“The cockpit, made completely of carbon fiber and aluminum, represents a sort of survival cell, allowing the driver to isolate and protect themselves from external elements,” De Silva explained. “We kept an eye on the future when designing the Egoista, with the idea that its cockpit could have been taken from a jet aircraft and integrated into a road vehicle, to provide a different travel option.”

At 600 horsepower, in the tensile strength of a body formed largely of aluminum and carbon fiber, it is doubtless a very fast travel option.

The exterior combines striking architecture with the latest materials to create a highly muscular structure, implying the strength and vigor of the Lamborghini logo, another aspect inspiring its design. Overall weight is lessened by the use of carbon fiber on the hood.

Viewed from various angles the Egoista looks as much like a time machine or solo star cruiser as it does an automobile. With the central cockpit structure and the bodies three perceptible longitudinal elements, it has the appearance of a trimaran with wheels, so futuristic does it appear, one wonders what the vehicle runs on?

Surely we would know if the Volkswagen Group had solved the riddle of magnetic or gravitational drive! Maybe it’s powered by ultraviolet laser pulses, but then why would it need a V10? We digress…

The driver's cockpit has a transparent green octagonal screen above the steering column, that sports a wheel that looks more like the upturned horns of a bull. The screen features data in an emulation of a targeting display.

Aerodynamics are enhanced by flaps integrated into the vehicle’s outer body, depending on the speed of the vehicle. Rear flaps activate automatically at high speeds, increasing stability, while air intakes behind the hood help the powerful V10 powerplant keep its cool. While the sloping front of the Egoista is intended to increase downforce, the rear is fully open carrying through with the aircraft inspiration of the design, including lights more like those on a small jet.

Also in keeping with the aerospace theme, the display mentioned earlier describes the vehicle’s position in three dimensions like a plane. It has LED clearance lights including two white lights up front, two red rear lights, and a flashing red light on the tail.

Two orange bull's eyes on the sides mark the steps where the “pilot” must enter. Again, like a plane, you can rest your body weight just anywhere. Lights on the top mark the aerial view with red on the left and green on the right.

This highly unusual vehicle with its aeronautical effects could easily seem a low flying UFO at night – in this case standing for Unbelievably Fast Object. Side markers and two more lights on the roof render this four-wheeled UFO unique even in the dark. The actual xenon headlamps are hidden where the central body joins the separate fender structures in front, right behind the front air intakes.

To take the allusion to its ultimate end, not only is the Egoista comprised of lightweight aluminum and carbon-fiber, the body itself is made from the same anti-radar material as a Stealth aircraft, also used for the wheels and embellished with carbon-fiber plates to lessen drag. Somehow all of this explains the somewhat angular shape.

Frankly, this is total automotive indulgence for the Top Guns of the driving world.

“It's as if Ferruccio Lamborghini were saying: I'm going to put the engine in the back, I don't want a passenger. I want it for myself, and I want it as I imagine it to be. It is a fanatical vehicle, Egoista fits it well.”

That is precisely what the Lamborghini name inspires – not only in those lucky enough to drive them, but also those who spend a lifetime just wishing they could.