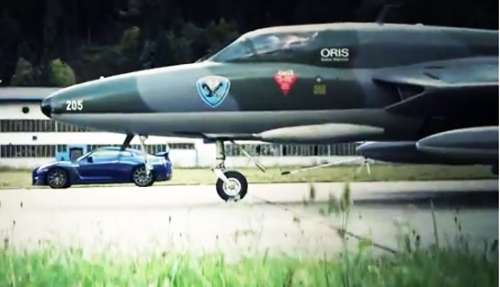 How long a Nissan GT-R can outpace an Oris Swiss Hunter fighter jet off the line was the compelling quest of a journalist from N-Magazine in Germany recently.
Advertisement

NissanDeutsch has just posted the video of the unusual speed competition on YouTube and various Nissan channels. It is definitely a comparison of rubies to diamonds as both are shiny, fast and brilliant, but obviously one makes a big deal out of downforce while the other’s very existence depends on the creation of lift.

A quick look at the respective stats reveals the Nissan GT-R has 545 horsepower, weighs 3800 lbs, can set a quick zero to 60-mph time of 2.7 seconds using R-Mode Start and has been proven to accelerate zero to 100 in a short 8.5 seconds. It has a factory defined top speed of 193 mph.

Although specs for the Oris Swiss Hunter fighter jet weren’t provided except for its 22,000 horsepower, by looking at other jets we can assume it weights as much as 30,000 lbs or more fueled and has a top speed well over Mach 1. It probably has a takeoff speed around 160 to 180 mph.

The Swiss jet can climb to 50 or 60,000 feet above sea level while the Nissan GT-R can only ascend to about 14,130 feet on the Mount Evans Scenic Byway, the highest paved road in North America. No road in Europe even comes close to that altitude.

Though the video discussion between the German journalist and Swiss fighter jet pilot is in German, certain aspects of the conversation are written on their faces.

The representative of N-Magazine is obviously excited by the prospect of racing the GT-R and the Swiss pilot is clearly amused by the prospect. Does he think the car has a chance? It’s too close to call without the translation of their verbal interplay.

According to comments on the YouTube page, English subtitles are in production for the video and will be posted next week.

Of course, both love to pilot their respective vehicles, and yet it was not clear if anything other than bragging rights hung in the balance of the friendly competition.

The racecourse covered 1500 meters along the airstrip in the picturesque Swiss valley. When the starting flag is dropped, the GT-R naturally gets off the line quicker, despite its much lower horsepower to weight ratio. Automotive drivetrains simply have a much stronger connection to the pavement.

Remarkably, though the fighter jet quickly begins to narrow the gap between the vehicles, it cannot overtake the GT-R until it is airborne and at some distance past the 1500 meter marker.

Next the jet soars high into the sky as the Nissan GT-R has to slow to a stop before it runs out of pavement – but it proved it could hold its own with a fighter jet at least until shortly after it lifted off the ground.