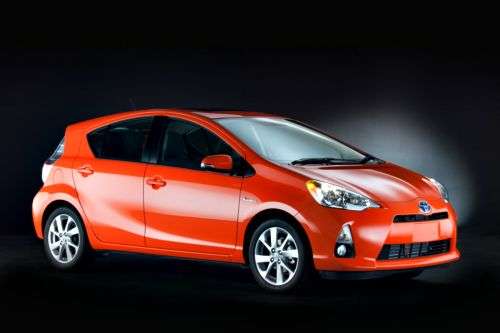 The 2012 Toyota Prius family of vehicles has been named GreenCarReports.com “Best Green Car to Buy 2012.” During the coming year, the Prius family will expand to four vehicles, including the now available the third-generation Prius Liftback, and Prius v, plus the still to come Prius Plug-in Hybrid, and Prius c.
Advertisement

GreenCarReports’ editors choose the most significant new “green” car based on the criteria of practicality, new technology and environmental impact. The Best Green Car to Buy award recognizes environmentally sensitive vehicles that are widely available below $60,000. Taking advantage of TheCarConnection’s ratings as the raw data for their evaluations, the editorial team selected the winner.

“The Prius is more than just one car this year,” said GreenCarReports Editor John Voelcker. “With a new Prius v and the Prius Plug-In Hybrid, it’s now a family of vehicles with some of the highest gas mileage on the market today, and the Prius name is likely to help encourage buyers to take the plunge into plug-in vehicles."

The Prius beat out a field of finalists including the Fiat 500, Honda Civic Hybrid, Infiniti M35h, Mitsubishi i, and Volkswagen Passat TDi for the award.

The Prius Liftback, now is in its third generation with an industry-leading EPA-estimated 50 mpg combined (51 city mpg/ 48 highway mpg) rating. The Prius v, went on sale in October, expands the liftback’s cargo capacity and versatility. With 58-percent more cargo space, the Prius v has more cargo space than most of the small SUVs available today, while still getting an EPA-estimated 44-mpg city.

The Prius Plug-in Hybrid, which will seat five, should get a manufacturer-estimated 87 MPGe (miles per gallon equivalent) in combined driving plus 49 MPG in hybrid mode. With class-leading fuel economy over 50 mpg in the city, the highest city mpg of any non-plug-in vehicle, the Prius c will join the Prius Family as a vehicle for youthful drivers seeking fuel efficiency, technology, and spirited dynamics in a subcompact. Both the Prius c and Prius Plug-in will be in showrooms during the spring of 2012.

The development of the systems governing the operation, integration and regenerative capabilities of the Hybrid Synergy Drive system represent significant engineering expertise, helping to enhance the efficiency and performance of every succeeding generation of Hybrid Synergy Drive equipped vehicles.

Panasonic Updates Profit Forecast, Noting How Much Tesla Batteries Help The Jump
2022 Porsche 911 GT3 Laps Nurburgring in 7:04 With Journalist Behind The Wheel
END_OF_DOCUMENT_TOKEN_TO_BE_REPLACED