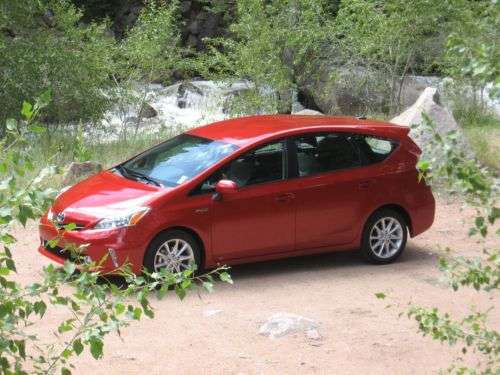 A mountain drive in the pre-production Toyota Prius V

Recently we drove the 2012 Toyota Prius V through the Front Range of the Rocky Mountains.
Advertisement

We purposely put off writing this story for a while in hopes of regaining some objectivity. Frankly, we have been quite enamored with Toyota’s wonder of engineering since attending the introduction of the second generation of the iconic Prius V.

The ploy worked insofar as we have realized none of the 10 new members of the coming Prius family is the right vehicle for everyone. It simply will never fit the definition of what a vehicle is supposed to be in some people’s minds.

Nevertheless with over 1 million units sold in the U.S. over the 14 years since its introduction (when gas was still relatively cheap) it has struck a chord with a good many buyers. It outsells all other hybrids hands down and 97 percent of all Prius models sold are still on the road.

“As a matter of fact, Prius has the highest brand awareness of any hybrid vehicle, making it to hybrids what Kleenex is to tissues and Levi’s are to jeans,” said Doug Coleman, Prius Product Manager at the Prius V introduction in Boulder CO.

Toyota estimates the Prius has saved its owners over 2 billion dollars in fuel costs. In fact, Toyota states we would reduce our need for foreign oil by a staggering 70 percent if everyone drove one, but we digress. The hybrid has also singlehandedly prevented 12 million tons of CO2 from entering the atmosphere.

Toyota Prius V is aimed at those who, though interested in what may be the greenest car in America, found it too small inside or lacking sufficient cargo space. The V is not a symbol for the Roman Numeral five – it is the character in the Latin alphabet and Toyota suggests it stands for “versatility.”

The wagon shape of the Prius V gives it 34.3 cubic feet more cargo space than it’s liftback cousin. That's a total of 67.3 cubic feet with the rear seats down. In fact, Toyota claims it has more room for hauling what-have-you than many small SUVs, including Equinox, Element, Escape, and Rogue.

In order to maintain the mileage the Prius is known for in a slightly larger vehicle, Toyota worked on the aerodynamics of the Prius V and lighter materials for fabrication of the car.

The Prius V has a coefficient of drag of only .29, which is very good. “The right choice of materials was an important aspect in making the Prius v safe, yet as lightweight as possible,” Coleman continued. “For example, the optional panoramic roof is made of a lightweight resin that is 40% lighter than conventional glass roofs of a similar size, and also has better insulating properties to help control interior temperatures.”

The Prius V will also debut a new upholstery material dubbed SofTex that weighs half what leather seat covers do but is quite as durable. Still, 99 percent less volatile organic compounds are produced in the process of creating this fabric as opposed to simulated leather seat coverings.

Even the stereo system is getting greener, as the new JBL system uses half as much power to produce the same level of sound, so you can happily kick out the jams without drawing too much precious electric power.

Driving impressions were very similar to the Prius, except taking a route from Boulder to Nederland, through Lyons and Ward before returning, gave us the chance to see how the hybrid would perform in the mountains.

We’re happy to report that driving the Prius V through the curving, climbing roads in normal drive mode showed no sign of being underpowered or a lack of cornering acumen.

It has a slightly heavier feel than the liftback model and seems well connected to the pavement. This seemed only appropriate as no other vehicle has quite as strong a connection to mother Earth. The ride is smooth and the seats are comfortable.

We look forward to giving the production model of the versatile Prius V a longer evaluation when the chance presents itself. The vehicle should be available this fall and it is estimated to cost about $3000 more than the liftback model.

Anyone who was originally interested in the Prius, but backed away because of lack of space within should take another look at the V – Toyota took your concerns to heart with this first new model in the Prius line.