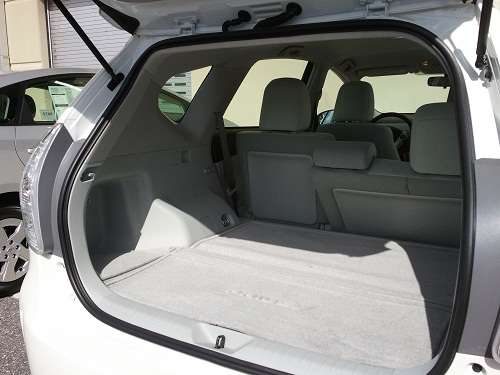 The Japanese car maker has achieved its objective with the 2012 Toyota Prius, but it had to give up something to reach its goal.
Advertisement

On November 4th the world's largest independent distributor of Toyotas and Scions Southeast Toyota Distributors had organized a media viewing event inviting media from five states to view and experience the 2012 Toyota Prius V. Torque News joined a number of car reporters traveling to Southeast Toyota Distributors' Westlake Facility near Jacksonville in Florida, where they gathered for a three-course lunch, followed by a marketing presentation on the new Prius V. A media ride-and-drives was also part of the event, with a technical expert being available on hand to answer questions.

The third generation of the Prius vehicles are apparently a huge hit with Toyota experiencing a paradigm shift. The company feels there is a good demographic support of what the new Prius should be as many young drivers are drawn to its new design and the features this car has to offer. It's more youth friendly and good for city traffic. Besides, fuel efficiency is in the minds of many consumers regardless of them being blue collar or white collar workers. Toyota said it is committed to continuing to build on its success and offering cars with more exciting design and performance.

Thus, building on the success of the three generations of Prii (Toyota's version of the plural for Prius) Toyota came out with the 2012 Prius V, in which it had two goals: both achieved.

The first goal is to offer an active, midsize families and the younger generation a fuel-efficient car with more cargo space. When the company's chief engineer Hiroshi Kayukawa was developing the 2012 Prius V, he traveled the U.S. extensively to see how Americans used their compact SUVs, midsize wagons and crossovers. He went to shopping malls, big box stores and tourist sites to see how owners were using those vehicles day-to-day, and for family vacations. He noticed that the size of the items Americans needed to fit into their vehicles were much larger than in Japan. Think bulk paper goods from Costco. So the overall size and capability of the Prius V have been designed to meet the needs of the American buyer who wants both size and fuel efficiency.

The second objective is to give the midsize American family a conventional vehicle, which is good for both weekday and weekend driving. The 2012 Prius V's features will bring in new buyers to the Toyota line-up: midsize buyers who value space and fuel efficiency equally, and don’t require a third row. They have kids with a lot of activities, and the Prius V may fit a number of roles in their household. For example, the back seats are reclining, something that kids love very much. Yet, reclining back and forward gives additional cargo space for those who need the additional space. It may serve as a larger family “hauler,” like a midsize SUV, or its fuel economy may also make it their “commuter vehicle,” but with more versatility than a sedan.

Yet, all these features add a little extra weight to the Prius V. Despite the fact that Toyota has used as many lightweight materials building this car as possible, the 2012 Prius V is a little heavier than the previous Prius models. Added weight slightly effects the fuel efficiency. The 2010 Prius model had a 51 PMG in city and 48 in highway driving. The 2012 Prius V gets 44 miles per gallon in a city driving, 40 on highways and 42 miles per gallon in a combined driving. It is still impressive and much better than many SUVs get these days, considering this car meets similar objectives in a city driving as SUVs do.

As it can be seen, the 2012 Toyota Prius V can compete in multiple segments with its objectives. In some segments it offers a better mileage per gallon. In other segments it offers a better capacity. Therefore, it holds a unique position in both the Toyota line-ups as well as the industry as with its blend of size, versatility and fuel economy very few cars can match its strong mix of both: good MPG and good capacity.

Driving the Prius V is a smooth experience. The transition between electric mode to gasoline engine is seamless. It's very good particularly in a city driving. The engine stops when the car stops (traffic light, city traffic). It comes with Toyota's exclusive Star Safety System with Smart Stop brake over-ride technology, and seven standard airbags. There is a standard back-up camera, with a Pre-Collision System and Safety Connect also available.

The price of the new Prius V ranges from 22,100 dollars to 39,000 dollars. It depends on the features one adds, such as panoramic roof and other goodies. In September of this year TorqueNews published a special story discussing the price of 2012 Toyota Prius V.

Anonymous wrote on November 8, 2011 - 10:56pm Permalink
I picked up a Blizzard Pearl Prius v on October 31. After having it for over a week I don't miss my 2010 Prius which I really liked. I love the new one with more space and all the other feature. It is a great addition to the Toyota family. I love mine!!!!