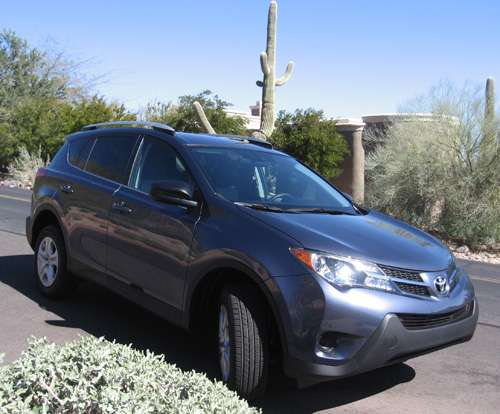 The all-new 2013 Toyota RAV4 has lost the identifying rear-mounted spare tire, but has gained richly in added value in the fourth generation of the Recreational Activity Vehicle.
Advertisement

The entire lineup now utilizes a 2.5-liter four-cylinder engine, eschewing the former V6 power plant in the name of fuel economy and distinguishing the first compact crossover from its bigger siblings.

Torque News was given the opportunity to see and experience the all-new 2013 Toyota RAV4 in its three trim levels this week in Carefree AZ.

“We introduced it to the U.S. market in 1995, and since then we’ve sold more than 1.7 million RAV4s, with 80 percent still on the road today – a true testament to its quality and durability,” said James Colon, Vice President of Product communications for the brand.

Exterior
The spare tire has been moved under the cargo deck to enable the use of a liftgate and to enhance the aerodynamics of the vehicle. The power liftgate on the Limited model rises to an adjustable height to better accommodate low clearances or tall owners.

The new chrome accented grille presents an aggressive visage that sweeps into stylish and aerodynamic lines flowing to the integrated roof spoiler. Front fender lines arc upward to direct air along the A-pillar and over the car.

Aerodynamic corner tucks at the rear and front edges along with an enhanced rear window angle and cabin taper help snuggle airflow up close to the RAV4, improving directional stability and lessening side turbulence and drag.

Down below, body covers were added underneath the floor and rear bumper, which combined with the other fresh design cues reduce the vehicle coefficient of drag to 0.329 from 0.334.

Other new additions include daytime running lights and chrome five-spoke alloy wheels in three different models for the three trim levels. The top tier Limited gets 18-inch split five spokes, while the LE and XLE get 17-inch variations.

Interior
The all-new 2013 Toyota RAV4 has a new two-tone soft touch materials color scheme that exudes a roomy ambience, though the former leather option has been replace with SofTex, a more than adequate substitute for many buyers. Notably leather is still used to wrap the shift lever on the Limited model, though the gated panel it moves within is standard in all models.

The instruments and controls have been simplified for easier and more intuitive use and some, like sideview mirror controls, have been placed where normally expected. The instrument panel has been updated with an easy to read blue background illumination and contrasting red indicators. A rearview camera is displayed on the 6.1-inch color display screen.

The new RAV4 has a lower steering wheel angle and extended reach, adjustable to a greater degree than the previous model. The center console includes a wide, soft sliding armrest, internal storage and cup holders for driver and passenger. Notably the air filtration system has been enhanced to filter out pollen in addition to dust.
.
The fourth generation compact crossover has 38.4 cubic feet of storage behind the second row and a tonneau cover (optional on LE) that stores beneath the cargo area when not in use. That a cargo boost of two cubic feet!

With the second row folded flat, the vehicle features a class leading 73.4 cubic feet not bad in a segment now crowded with 25 models to choose from.

Privacy glass and acoustic windshields are standard on all models, plus various unibody components have reinforced rigidity. New damping materials have been added to the dash panel and floor, while new sound absorption materials reduce noise from the rear door area.

A standard one-touch 3-blink turn signal is quickly appreciated whenever changing lanes or pulling away from a curb.

Powertrain, suspension, brakes
All models of the 2013 Toyota RAV4 use the same 2.5-liter DOHC 16-valve 4-cylinder engine with Dual VVT-I, developing 176 horsepower at 6,000 rpm and 172 lb.-ft. torque at 4,100 rpm. During lunch James Colon admitted the brand has no plans at present to introduce direct injection or turbochargers to the line.

The engine is coupled to a 6-speed automatic transmission with ECT-i. The base models at each trim level are front-wheel-drive and four-wheel-drive is a $1,400 option. The new tranny added two gears with revised gear ratios for all to optimize acceleration, fuel economy and enhance performance at all engine speeds.

Further a new Flex Start transmission torque converter enables the torque converter to lock up quickly and progressively for a smoother acceleration and increased efficiency. This was particularly noticeable in Sport mode. Engine speed is kept low to optimize fuel efficiency when accelerating from a standstill, something the previous generation only implemented in the two top gears.

The suspension uses MacPherson struts in front and trailing-arm double-wishbone in the rear. A larger stabilizer bar has been added to balance roll rigidity and stabilize vehicle stance in corners, improving road feedback via the wheel.

Brakes are ventilated 10.8-in. discs in front on the LE, while the other two models feature 11.7-inch rotors. The rear brakes have been enlarged for this generation to 11.1-inch drum-in type solid disc brakes.

The Drive
During our short time in Carefree we managed to spend roughly an hour and a half in the front wheel drive Limited and an nearly an hour in the AWD LE.

Though the new four-cylinder engine does not have quite the power of the former V6 it seems more than adequate for most daily and recreational driving.

The ride is very smooth and quiet, revealing the effects of the new generation’s enhancements. Our meandering through the area north of Phoenix took us along serpentine canyon roads and winding residential areas providing the opportunity to experience the 2013 Toyota RAV4’s performance in Normal, Sport and ECO modes.

In upscale suburban neighborhoods, the ECO mode made it easy to plod respectfully through the quiet streets at the legally proscribed speeds.

We liked the comfortable ergonomically designed interior, new seat designs and the ease of navigation and phone pairing via Entune.

Value
Toyota has managed to bring a new front or four-wheel-drive compact crossover with a number of technical upgrades, and a high level of creature comforts and safety features to the market at a very attractive price point.

The LE comes at a base price of $23, 300 with a fairly high level of equipment and features and only a few options to choose from.

With dual-zone automatic climate control, power moonroof, fog lamps and sport seats added, the XLE starts at $24,290 with the only options being a navigation system and Entune. With those included, the front wheel drive XLE is only $25,320 – less than the Ford Escape or Honda CR-V without a navigation system.

This model will make up 45 percent of the 200,000 RAV 4’s Toyota expects to sell during the calendar year.

When the added features and comforts of 18-inch alloy wheels, the adjustable power liftgate, SofTex upholstery, power driver’s seat with memory and heated front seats are added to the mix, the top of the line Limited is still only $27,010.

“It all started 18 years ago when Toyota had a vision for a vehicle that would change the way people think of SUVs,” said Colon as he concluded his pitch. “And now, the fourth-generation RAV4 will let our customers go places they’ve never gone before, with all the style, comfort, features and technology they could possibly imagine.”

We’re thinking Toyota may have just scored a hat trick with these three new vehicle variants. If you’re looking at any of the 25 different compact crossovers on the market, the all-new 2013 Toyota RAV4 might set the benchmark for the purchase.

Aaron Turpen wrote on February 15, 2013 - 5:50am Permalink
Definitely a great car and one that will help Toyota hold supremacy in this segment. I had a long interview with Jeff Halsey of University of Toyota in which we all but disassembled the RAV4's power train. I'll post a write up on how this vehicle will appeal to the DIY maintenance crowd in the next couple of days.