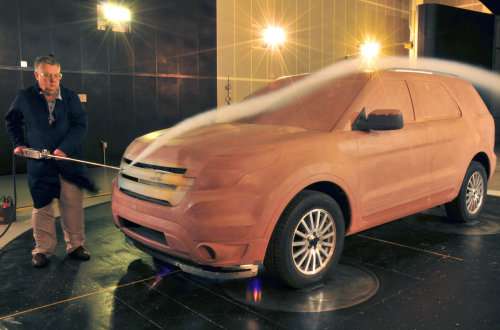 A lot of things influence fuel efficiency and in efforts to meet Federally mandated mileage goals, Ford engineers are using wind tunnel studies to extract every possible mile per gallon by minimizing wind drag. As a result, the 2011 Ford Focus employs an innovative aerodynamic shutter system in the grille to deliver up to 40 mpg.
Advertisement

Using this research, Ford claims to have achieved best-in-class if not unsurpassed fuel efficiency in every comparable automotive genre.

Economy is produced whenever friction and drag are reduced – not only within engines and transmissions, but as air flows about a vehicle. The goal is to efficiently slice through the air at freeway speeds.

For example, both the 2011 Ford Explorer, and the Ford Flex crossover enjoy improved mileage from extensive detail work by designers and aerodynamicists in the wind tunnel.

We learned at an intro of one of those block shaped vehicles, most of a vehicles drag comes from the undercarriage. A curvaceous, streamlined sports car has a coefficient of drag of about .027. The square vehicle in question had a coefficient of .035, still considered (just a couple of years ago) to be very good.

The Explorer delivers fuel economy of 17-mpg city and 25-mpg highway, equipped with front-wheel drive and the standard 290-horsepower V6 engine. By careful attention to details like the front air dam, sideview mirrors and rear liftgate spoiler gained nearly 1 mpg as the Explorer cruises the highway.

F-150 trucks feature a beveled edge to the rear of the cab that directs airflow over the pickup box. The tailgate angles outward to create a lip, channeling air over the cargo box. The front bumper valance and spoiler were formed to manage airflow beneath the truck.

Application to cars
Wind tunnel research was applied to the Ford Fusion and Fusion Hybrid to optimize their fuel consumption as well. Redesigned fascias, front and back, along with tire and underbody shields help the Fusion get more from a gallon of gas.

The 40-mpg, non-hybrid Ford Fiesta was recently named The 2011 Rocky Mountain High-Mileage Vehicle of the Year.

The Ford Focus sedan also utilizes low rolling-resistance tires combined with a rear spoiler and airflow optimized wheel covers to get up to 40-mpg on the freeway.

Active grille shutters
The active grille shutter system will open grille slats when extra engine cooling is required, as in low-speed stop-and-go driving. When cruising at steady speeds, the grille slats automatically close to improve aerodynamics and fuel efficiency. This feature is currently available on the Focus but will soon migrate to other Ford models.