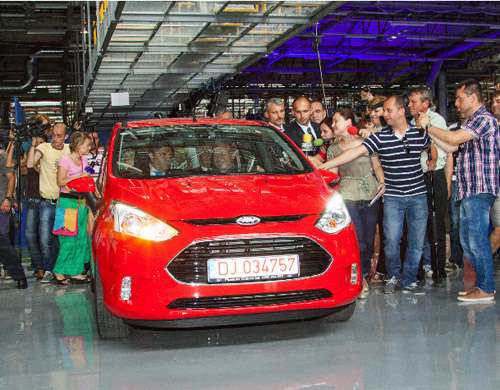 Ford is revving up production of the versatile B-MAX model in its thoroughly modernized manufacturing facility in Craiova, Romania. Ford has already spent $650 million out of a planned $875 million to bring the facility up to world class readiness to crank out the B-MAX.
Advertisement

The innovative designed of the multi-use vehicle features hinged front doors and sliding rear doors into which the B-pillar is integrated, creating a 4.9-foot opening for loading cargo or passengers.

It is the first car to roll off the line in Craiova, where the model will be produced exclusively. Notably the very first B-MAX off the line was purchased by Romanian President Traian Basescu, as plant output was raised to volume production today.

“This is a great day for Ford Motor Company, our Craiova manufacturing facility, and for Romania,” said Stephen Odell, chairman and CEO, Ford of Europe. “This is a world-class facility building two of Ford’s most advanced products – the Ford B-MAX and the 2012 International Engine of the Year, the 1.0-litre EcoBoost engine – to the highest quality levels for our customers.”

The B-MAX will be available throughout Europe this year, leading its class in fuel economy and CO2 emissions forboth diesel and gasoline variants. For example, with Auto-Start-Stop standard, the 118 hp 1.0-liter EcoBoost engine releases only 114g/km in greenhouse gasses while achieving fuel economy of 57.6-mpg, which Ford asserts to be 15 percent better than competing vehicles.

It will come with either the 98-hp or 118-hp versions of the 1.0-litre EcoBoost engine that won nod as the 2012 International Engine of the Year this month. Both engines will be fabricated in the Craiovia facility.

The B-MAX will also claim its place among Europe’s most tech savvy small cars, with the inclusion of Active City Stop, able to prevent a low-speed collision by automatically applying the brakes. It will also be the first European car to offer Ford SYNC with Emergency Assistance, a voice controlled driver assistance system.

As safety is another favorable sales incentive, Ford is expecting a five-star rating by Euro NCAP for the B-MAX, despite a new, stricter ratings protocol.

“Volume vehicle and engine production at Craiova brings a new level of sophisticated manufacturing to Eastern Europe,” said John Fleming, executive vice president, Global Manufacturing and Labor Affairs, Ford Motor Company. “Craiova is today one of the most competitive and modern production sites in Ford’s global manufacturing footprint and, indeed, in the global auto industry as a whole, with cutting-edge facilities like its class-leading paint shop.”

Ford will also build a 1.5-liter gasoline engine at Craiova, that will go into production next year, with details to be announced later.