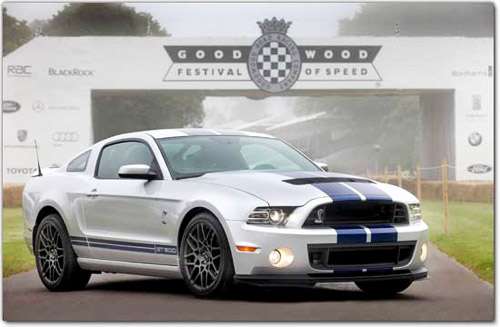 The Ford Shelby Mustang GT500 may be well known in the US, but has just made a big impression in Europe by putting its 662 horsepower to the test on the Goodwood Hill Climb, during the Festival of Speed last weekend.
Advertisement

As the fastest, most powerful production Ford Mustang ever built, the Goodwood Festival of Speed provided the perfect backdrop for its European coming out party, in the grasp of guest race drivers.

Able of reaching speeds over 200 mph, the Ford Shelby GT500 has a 5.8-litre supercharged V8 engine – the most powerful ever featured in a North American production car.

The annual Goodwood Festival of Speed has a history stretching over a century as a uniquely British combination of hill-climbing, rally staging, garden parties and automotive exhibits. It generally gathers some 150,000 rabid fans. First staged in 1893, its centerpiece is the hill-climb along a narrow tree and wall-lined grade, rising more than 300 feet in a single mile plus a bit.

Hardly a sufficient challenge for the Shelby GT500, but one it relishes to show off its Brembo six-piston front caliper brake system, updated gearing for superior traction, precise suspension tuning and a driver-adjustable launch control that compliments the engine and chassis systems.

The Shelby that debuted at Goodwood also featured an optional Performance Package with electronically adjustable dampers and a Torsen limited-slip differential, plus a Track Package to provide all-out racing performance thanks to three additional coolers.

The Ford Shelby Mustang GT500 is distinguished from other ponies by downforce-generating front grilles, an air splitter, a quad-exhaust system and new forged-aluminum wheels. It was developed to the specifications of the late American racing legend, Carroll Shelby, who said after driving one that Ford had exceeded his wildest dreams. The legendary American racer and race car designer, sadly, passed away last May.

Also during Ford’s presence at Goodwood, the new Ford Focus ST was showcased live and in its starring role in The Sweeney, a new film based on an old BBC series concerning detectives collectively known as the Flying Squad.

The Focus ST showed its metal against a Jaguar XFR on the one-mile hill climb.