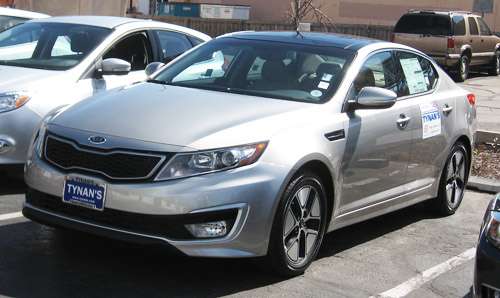 EPA report reveals Kia most improved in efficiency, emissions in 2010

Kia Motors America (KMA) has been shown to have achieved "the biggest improvement in adjusted CO2 and fuel economy performance from Model Year (MY) 2009 to MY 2010," raising fuel efficiency by 11.6 percent fleet-wide and lowering greenhouse emissions by 10.1 percent overall.
Advertisement

Additional results place KMA in a tie for best Corporate Average Fuel Economy (CAFE) at 27.0 miles-per-gallon for 2010 models. Kia comes in number two for lowered CO2 emissions in 2010 and breaking ahead of long time leaders like as Honda and Toyota.

"As an industry leader in fuel economy, Kia is committed to providing safe, high-quality vehicles that are socially relevant to consumers," said Michael Sprague, vice president, marketing & communications, KMA. "Our goal is to stay ahead of the industry by applying innovative technologies such as direct-injection and turbocharged engines to advance our efforts and continue improving on the benchmarks Kia has set in the sustainability realm."

Through Kia Motors' EcoDynamics, established in 2010, the company seeks to lessen the environmental impact of their vehicles and fabrication processes, while assessing data to enhance such efforts, as they reduce harmful chemicals across the board and expand the use of recycled materials and sustainable natural resources.

The name will also be the namesake of a new sibling line of greener vehicles, announced at the 2010 Chicago Auto Show along with the debut of the Ray concept car.

During this weeks Green Car Convoy in Colorado, one dealer brought out a 2012 Kia Optima Hybrid – a sleek looking sedan with a base price just over $25K that gets a combined mileage rating of 37-mpg and scores 17 out of 20 on the EPA emissions ratings. Fully loaded the vehicle comes to roughly $32,500 delivered. Anyone desiring a sporty sedan with an annual projected fuel expenditure of $1,498 should give this model a serious look.

The 102 page EPA report goes into great detail summarizing trends in greenhouse gas emissions and fuel economy for both gasoline and diesel vehicles sold in the U.S., since the 1975 model year. In general, the industry’s average CO2 emissions and fuel economy have marked incremental improvements in 2010 when compared to 2009 models and the currently best levels since the analysis commenced in 1975.

KIA deserves kudos for showing the most improvement, but let's not overlook the fact they probably had a lot of room for self-improvement. Still dedication and devotion to a goal usually produce results and we applaud Kia’s efforts. Though we have yet to drive it, the new Optima Hybrid is notable for being a stylish, mid-size sedan getting 40-mpg in town for only $25K.

The hybrid may be filling a transitional function in the American auto market, but it is still an important one while the charging infrastructure for EVs is built and innovations in other alternative fuels continue to develop.