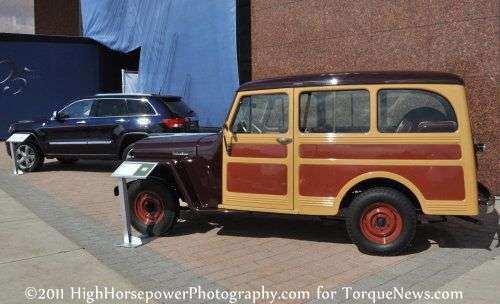 This weeklong celebration coincides with the Jeep Brand’s July 15 anniversary observance, the date the U.S. Army signed a contract with Willys-Overland to become the lead producer of the military reconnaissance vehicle. Free admission, a program for Jeep enthusiasts and a specially-themed cruise night are all highlights of 70 Years of Jeep Week at the Walter P. Chrysler Museum, sponsored by the Dana Holding Corporation , July 12 – 17.
Advertisement

Dana's partnership with the museum in Auburn Hills, MI., celebrates the auto supplier's 70-year association with the Jeep Brand. The Maumee, OH based company has provided front and rear axles and propshafts since the original Jeep – the 1941 Willys MA – was introduced seven decades ago during World War II.

Spicer components have always been in that model's production as the Willys MA (which later became the Willys MB) evolved, after the war, into the civilian Jeep CJ-2A and eventually into the Jeep Wrangler line that Chrysler continues to produce today. Spicer axles and driveshafts have also been part of the Jeep Cherokee, Jeep Commander and the Jeep Liberty.

• The exhibit is updated with an array of eight production and concept vehicles tracing Jeep's evolution from military reconnaissance to its popularity at home and the backroads of America – including where there are no roads at all. The Jeeps, which will remain on display through the year encompass 1941 Willys MA,1943 Jeep MB, 1945 Jeep CJ-2A, 1949 Willys Wagon, 1950 Jeepster, 1973 Jeep CJ-5, 1985 Jeep CJ-5, 1998 Jeepster Concept and the 2001 Willys II Concept.

A display of the Spicer axles and propshafts instrumental in Jeep production enhances the historical images, memorabilia and an extensive narrative that rounds out the exhibition.

• The 70 Years of Jeep Cruise Night is slated for July 13, from 5:30 to 8:30 p.m. Dana will join with sponsors Golling Chrysler Dodge Jeep Ram and Golling FIAT of Bloomfield Hills and Shuman Chrysler Dodge Jeep Ram of Walled Lake, in welcoming enthusiasts with cars of all makes and models to the third event of the summer season and will present the evening’s vehicle awards, including Best Jeep.

Dana will showcase its products on the museum’s grounds along with the line of 2011 Chrysler, Dodge, Jeep, Ram and FIAT models, displayed courtesy of the dealers.

• A Jeep Heritage Lecture is set for July 16, from 9:30 a.m. to noon and admissions is $13 in advance or $15 at the door. Larry Johnson, an avid Jeep history buff and retired Mopar Accessories Product Engineer, will provide an overview of the iconic vehicle's history. Johnson will emphasize the vehicle's early years beginning with Bantam and detailing Jeep's progression through World War II. He will alos highlight the vehicle's evolution through various corporations over the years, sharing interesting details and obscure facts he has uncovered through in-depth research.

• The 70 Years of Jeep Free Weekend on July 15 – 17 will allow guests visiting the museum to enjoy self-guided tours of the entire three floors – including the special 70 Years of Jeep exhibition –at no charge, compliments of Dana. Weekend hours are 10 a.m. – 5 p.m. Friday and Saturday and noon – 5 p.m. Sunday.

Admission is $8 for adults, $7 for seniors (62 and older) and $4 for six – 12 year olds. Children five and under are admitted free; group rates are available. Download two-for-one admission coupons at wpchryslermuseum.org