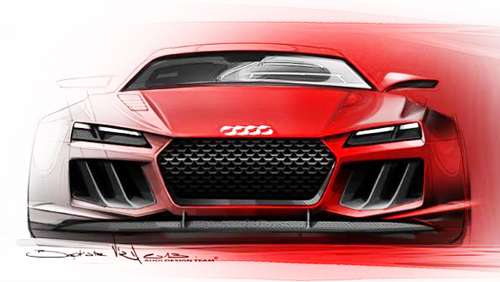 The new Audi Quattro Sport Concept has been generating widespread speculation about what the luxury brand will unveil at the Frankfurt auto show and its only growing stronger with Audi's released renderings of the design today.
Advertisement

All Audi is otherwise willing to reveal is the aforementioned name, but could this be the next in the growing movement towards plug-in hybrid sports cars?

Audi names the Audi 80 compact sports sedan that went on to win the Rally World from 1982 through 1984. Nevertheless, 30 years later Audi’s automotive development team has s ultra-light-weight carbon-fiber and aluminum to work with, liberating the concept from worldly concerns and allowing Audi to define and produce what may well be the most sophisticated, technologically advanced and powerful performance vehicle it has ever built.

This is not hard to believe once you drive an Audi A8, let alone any of the more performance pedigreed vehicles the firm produces.

Without a word from Audi, one can rationally presume the new concept will utilize the new track-proven E-tron hybrid electric vehicle technology.

The renderings reveal a design concept that’s slung low and wide, creating an immediate emotional compulsion to come inside and see what other surprises await. The earlier concept, which debuted at the 2010 Paris Auto Show, pales in comparison to the vehicle promised by the drawings and slated to be revealed in Frankfurt next month.

A quiet revolution took place at Audi during the last two decades and after a long period of ascension in the ranks of luxury automobiles, the brand shows no sign of slowing its upward movement.

Audi is taking aim at its rival, namely BMW, and to put it mildly, the race is on!

It’s only an hour’s drive from Audi’s Ingolstadt headquarters to BMW’s corporate offices in Munich – in the marketplace the distance may be getting less day by day.

Each and every auto show is a battleground for market share in the 21st Century and as the winds of change blow across Germany a great deal hangs in the balance.

Fortunately, the battle between these two Goliaths is likely to spin off progress, innovation and an ever-improving driving experience for David, Sherry and other humans the world over.

We can hardly wait to see the results.