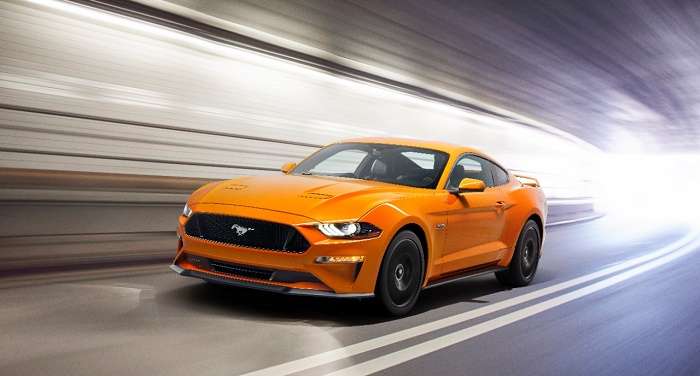 No, The 2018 Mustang Doesn’t Look Like Darth Vader, but It’s Cool Anyway

It’s Star Wars Day, since it’s May the Fourth, and Ford is saying that the nose of the 2018 Mustang was inspired by one of the most famous villains of all time – the franchise’s iconic Darth Vader. Seriously.
Advertisement

This is what Ford design manager Melvin Betancourt told Autoblog: “When we were designing the new 2018 Mustang, the team wanted to make the new model look more aggressive, and one place where we found inspiration was one of the most famous screenplay villains of all time. The angled nostrils and contours of Darth Vader's mask became the inspiration for the Mustang's new fog lamp scoops and front-end shape.”

Maybe Betancourt was telling the truth, or maybe he was having some fun with Star Wars Day, or both, but I don’t quite see it. Well, maybe, from certain angles, but it’s not obvious.

Of course, maybe I’m taking it too literally – the 2018 Mustang does have a sort of overall villainous look to it, even if it doesn’t instantly evoke Vader.

Ford's Been Accused of Star Wars Influence Before

Ford has been accused of sneaking Star Wars influence into design in the past – the company’s Taurus sedan was derided for looking too much like a stormtrooper’s helmet back during the 1990s. This, at least, would carry much more positive connotations – the 2018 Mustang is a much better-looking car.

Design influence is in the eye of the beholder. Maybe I’m crazy for not seeing the Vader influence (and again, I do sort of see it now after Betancourt’s comments – it’s just not something that would’ve jumped to front of mind at first glance), and feel free to tell me I’m wrong.

Of course, if Ford really wants to have a Star Wars influence in the Mustang, it could give the Sync infotainment system the voice of James Earl Jones – aka Darth Vader himself.
Now that would be unmistakably bad ass.