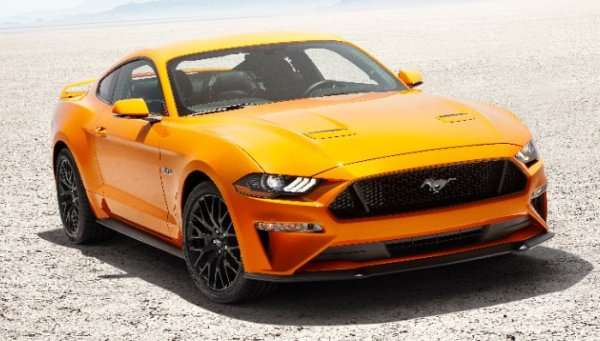 Ford Motor Company introduced the 2018 Mustang with the news that the base V6 had been removed from the lineup and today, we take a look at the pros and cons of the naturally aspirated V6 no longer serving as the base model Mustang engine.
Advertisement

The 2017 Ford Mustang (not including the Shelby GT350) is offered with three engine options – the naturally aspirated 3.7L V6, the turbocharged 2.3L EcoBoost 4-cylinder and the naturally aspirated 5.0L Coyote V8 in the Mustang GT. When Ford introduced the facelifted 2018 Mustang, the company announced that the 2.3L EcoBoost will be the base model engine for the new model year and the 5.0L V8 will still be the powerplant for the Mustang GT (shown above), but the 3.7L V6 will no longer be offered.

Ford also announced that 2.3L EcoBoost and 5.0L V8 will each be getting more power, but for many people, the big drivetrain news centered around the apparent end of the entry level V6. While some people might insist that a muscle car should only be offered with a V8, the V6 engine has long been the most popular option with new car buyers and in its absence, many 4-cylinder skeptics are wondering how this is going to impact the entry level Mustang.

In my opinion, replacing the naturally aspirated V6 with the EcoBoost 4-cylinder only makes the Mustang better, and today we bring you a look at the pros and cons of the 4-cylinder replacing the 6-cylinder in the base model Ford Mustang.

The Cons to No V6
Since the downsides to the end of the V6 Mustang are so minimal, I will start with that aspect of the pros-and-cons discussion. In all reality, the only downside with the removal of the V6 engine from the Ford Mustang lineup is purchase price, but that is something which could be trimmed down for 2018.

If you price out a 2017 Ford Mustang fastback in its least expensive form, you will get a V6 model with the manual transmission with a starting price of $25,185 (not including destination), but if you opt up to the 2.3L EcoBoost model, the MSRP jumps to $26,195. In theory, the EcoBoost Mustang starts $1,010 more than the V6 model, but it should be noted that the differences between the V6 and EcoBoost models go beyond the engine. For instance, the basic V6 Mustang comes with 17 inch wheels and without power seat controls, while the EcoBoost package comes with power seats and 18 inch wheels.

If you remove the bigger wheels and fancier seats, the price difference between the V6 and EcoBoost fastback Mustang might be narrower than $1,010, but the odds are good that the new 2018 Ford Mustang in base form will cost a little more than the 2017 V6 Mustang fastback.

As I see it, purchase price is the only downside to the EcoBoost engine becoming the new base engine, as those folks who are concerned most with the look of the car are more likely to go with the least powerful and least expensive engine option.
However, for everyone else who is looking to buy a base model 2018 Ford Mustang, replacing the V6 with the EcoBoost makes for a far better base model muscle car.

The Pros to the Base Model EcoBoost
Ford hasn’t announced that exact power figures for the 2018 EcoBoost Mustang, but the company has promised that it will have more torque than the current 2.3L EcoBoost. Right now, the EcoBoost offers 310 horsepower and 320lb-ft of torque while the 3.7L V6 offers 300hp and 280lb-ft of torque, so even if the EcoBoost carried forward without any changes, it still offers advantages in horsepower and torque. The 2018 EcoBoost will have even more torque, making for an even better small performance car engine. The EcoBoost engine feels much stronger from a stop and through the mid-range, providing an all-around better driving feel than the V6.

Third, while the 2.3L EcoBoost engine lacks to roar of the 5.0L V8, the turbocharged 4-cylinder has a more pleasant exhaust note than the V6.

Finally, the EcoBoost engine yields better fuel economy than the V6 in every category, with the turbocharged 4-cylinder besting the V6 by at least 3mpg across the board. When you factor in the new 10-speed automatic transmission, the EcoBoost Mustang should be even more fuel-friendly for 2018.

The bottom line is that while the 2018 Ford Mustang might be a little more expensive to get into when compared to the 2017 models, the new base model Mustang with the 2.3L EcoBoost engine makes the new model more efficient and better performing in every situation.