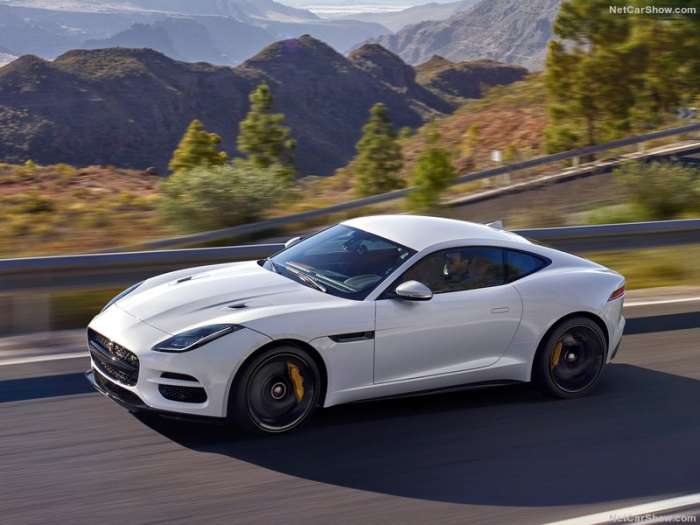 Jaguar F-Type R is Beautifully Designed, but Isn't Worth Alienating Women Over

The Jaguar F-Type is quick, agile, looks great, and sounds incredible. But it’s not the car to get attention for wrong reasons. We should stop using wrong terms to describe cars.
Advertisement

I still vividly remember the first time I saw a Jaguar F-Type in person. It was an F-Type R convertible painted bright red, and I couldn’t stop staring. In my head, I knew it wasn’t as good as the Porsche 911, but at that moment it didn’t matter. It also didn’t matter that the F-Type R had all-wheel drive and an automatic transmission. What did matter was that I was about to be handed the keys. By the way, see how 2015 Jaguar F-Type R Coupe does vs 2015 Porsche 911 Turbo.

Sliding into the driver’s seat, I buckled my seat-belt, lowered the top, and pressed the pulsing start button. Instantly, my ears (as well as the ears of anyone nearby) were filled with the glorious sound of the F-Type R’s raucous V8.

It was an experience you truly have to experience to understand, and what made it even better was that the car was only in regular mode. I pressed the to put the active exhaust in its louder setting, then pulled onto the road. Even under light throttle, it sounded incredible. When I finally got the opportunity to experience wide-open throttle, the experience was pretty close to life changing.

For the next week, I drove that car all over Boston, as well as up to Vermont and back. Everywhere I went, even when driving as carefully as possible, people stared. I once parked it near a playground, and before I knew it, it had drawn a crowd of children who were looking at it like a spaceship had just landed on earth.

As annoying as it could be at times to get that much attention, I also completely understood. Because while the 550-horsepower Jaguar F-Type R would still be a fantastic car even if it looked like a Yugo, it’s arguably one of the best-looking new cars you can buy right now. If you spring for the V6 version, the looks-to-cost ratio swings even more in the F-Type’s favor, and I fully believe the manual transmission F-Type S will be a future collector’s car.

But Not Always the Best Attention

But one thing that did frustrate me was how people described the way the car looked. Despite how many words there are in the English language that could possibly be used to express appreciation for such a wonderful design, everyone seemed to fall back on one word: sexy.

The thing is, though, the F-Type R isn’t sexy. It looks fantastic, but it’s still a car. A tool. A toy. An inanimate object. It’s not alive. It's a car. It’s visually appealing in the way a sunset is visually appealing. So why are we using that word?

We Can Do Better

Granted, part of the blame lies with auto writers, myself included. It’s such a common descriptor, we toss it around like it’s a word that actually applies to cars. But at the same time, it’s a little lazy. Surely, when attempting to describe a new car, there are more accurate or precise words to use.

The bigger issue, though, is that it’s a byproduct of how sexualized car culture still is. We’ve only recently gotten to the point where scantily clad women are no longer common on the cover of car magazines. And that’s probably partly because most of those magazines are out of business. Even at auto shows, a few automakers still dress their booth professionals in outfits that are decidedly not professional.

On the internet, it’s even more overt. YouTube is filled with videos of scantily clad women being driven around in fast cars for no reason other than so viewers can see their breasts bounce. Check out eBay or Craigslist ads, and it’s perfectly normal to see sellers advertising some woman’s body more than the car. And forums? Even if you ignore the abundance of suggestive avatars, it’s common for conversations to get legitimately explicit. While talking about cars.

Sure, referring to an exhaust note as orgasmic might be all in good fun between friends, but it’s also important to take a step back sometimes and look at car culture as a whole. And when I do that, I see a boys’ club that alienates a lot of outsiders, especially women, with overly sexual language.

Even if a little girl thinks cars are cool, what’s she going to see when she starts exploring the industry? Is it women being encouraged to participate as equals as we express our mutual appreciation of these vehicles? Of course not.

A well-informed parent could put together a list of some great women who write about cars while carefully steering their daughter away from the more toxic corners of the automotive universe, and all it would take is one trip to the comments section for her to get a pretty good idea that it’s still firmly a boys’ club.

Will all that change overnight if we agree to stop using sexual terms to describe cars? Not at all. It is, however, a start.

Marcus Cato wrote on May 8, 2018 - 3:03pm Permalink
Just took delivery of my 2018 F-type R and my wife's first reaction, "Sexy". Let's keep the humanity and personality in cars as well as with each other. There should be no offense to thinking something is sexy, or that it is a male only thought. Us gear-heads (male and female) react to cars with physical emotion, not just with specs.