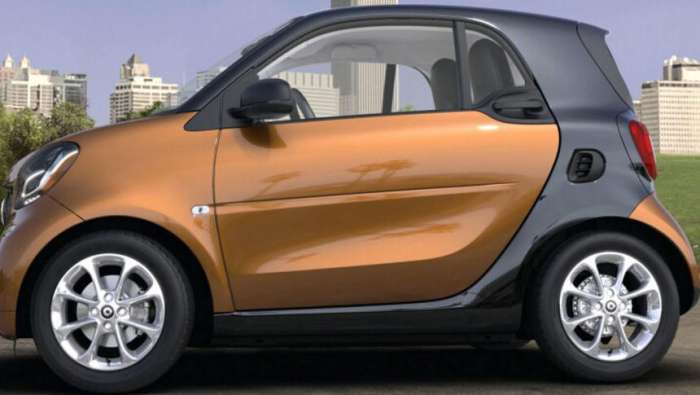 Where There’s Smoke, There May Be Burning 08-09 Smart ForTwo

The National Highway Traffic Safety Administration has begun to look into eight reports that 2008-09 Smarts ForTwo have erupted into flames.
Advertisement

To paraphrase an old cliché, “where there’s smoke, there may be a Smart ForTwo burning!” Published reports this week indicated that the National Highway Traffic Safety Administration (NHTSA) had opened a preliminary look into complaints that some Smart ForTwo, two-place microcoupes catch fire and quickly burn up.

The agency decided the rear engine compartments of the 2008 and 2009 ForTwo vehicles deserved a probe following eight complaints about fires in the car. Mercedes-Benz, the manufacturer of the microcoupe, said it is unaware of any injuries related to any incidents.

According to six of the eight complaints, the fires began while the little vehicles were being driven. When the flames erupted, the check-engine lights did turn on, and the operators noticed smoke and noises coming out of their cars before stopping and discovering the fires.

Neither of the other drivers saw any problems until after their vehicles were stopped. According to the safety agency, the complaints noted that the fires were severe. The cars were also “rapidly engulfed.”

Although it is not clear which model year vehicles were involved in particular fires, it is known that five of the fires occurred last year (2015) and the other three happened this year (2016).

A Mercedes-Benz spokesman emphasized the probe is not a full investigation. A preliminary evaluation is the first phase of an NHTSA investigation in which regulators decide if a more-advanced investigation is necessary.

Mercedes-Benz, in a statement, said:

“The safety of our customers is our primary concern, and we are cooperating with NHTA in its inquiry. We are not aware of any injuries related to this inquiry [of the Smarts ForTwo]. Customers with concerns should call our Customer Assistance Center at 1-800-367-6372.”

ANDREA CALABRESE wrote on April 29, 2022 - 8:28am Permalink
Do you have any further information as to why they started on fire?