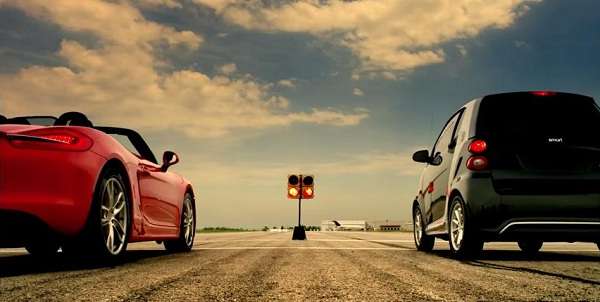 Could the pint-sized electric vehicle from smart possibly defeat iconic performance cars in a drag race? No, of course not. But it makes for one entertaining advertisement with a great knockout punch at the end.
Advertisement

If you’re familiar with the performance characteristics of electric motors, you probably saw this one coming. smart Canada uploaded a video to YouTube (via Inside EVs) featuring its tiny, goofy-looking fortwo electric drive (the name of which it stubbornly refuses to capitalize) competing against a Mustang, Audi, and Porsche in comically mismatched drag races at an airstrip.

Following an epic intro, the video shows the smart ED getting left in the dust by the powerful gas-powered sports cars. You have to watch it for yourself to appreciate smart’s sense of humor as it pokes fun at its underpowered little city car.

But this advertisement is more than just comedy. Electric vehicles are no more powerful than similarly sized gasoline models, and often are at a pure horsepower disadvantage – you may be amused to find that the smart ED packs a whopping 74 horses and goes from 0-60 mph in 11.5 seconds. However, one of the massive advantages of an electric drivetrain is the instant torque that the motor provides.

Rather than produce its maximum torque somewhere near the middle of the rev range, as with any internal combustion engine, electric motors reach their peak torque from a dead stop. They also do not require a transmission to shift gears. These characteristics allow electric vehicles to be very quick off the line, regardless of the vehicle’s power output.

Of course, the torque curve of electric motors and the generally underwhelming horsepower of today’s EVs mean that powerful internal combustion engine cars will eventually catch up in a drag race. How soon depends on the vehicles in question, but as smart demonstrates, the electric vehicle will almost always be quicker immediately off the line.

So the video concludes by panning the camera upward to show that in each race, the smart was quicker to the 5-meter mark. This off-the-line capability in the city is then demonstrated as the smart ED bolts away from a red light to emphasize the main message: “Top speed means nothing in the city. It’s the first 5 meters that count.”

This is a well-produced, entertaining, and educational advertisement that knows exactly who it is targeting. Kudos to smart for putting the video out there – it would be nice to see other EV makers demonstrate this kind of clever advertising.