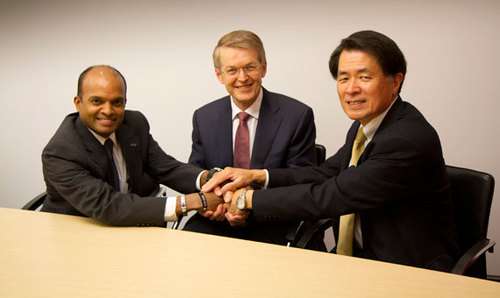 The new alliance pledges to work together to develop a common fuel cell stack and other items that will lead to volume production of fuel cells, cost savings through economy of scale, and make an affordable fuel cell vehicle a reality.
Advertisement

A new three-way collaboration to accelerate commercialization of fuel cell technology was announced on Monday in Yokohama Japan. The alliance brings together Daimler, Ford and Nissan and has the goal of launching the world's first affordable, mass-market fuel cell electric vehicles as early as 2017. This announcement follows last weeks tie-up between Toyota and BMW that includes fuel cell electric vehicle (FCEV) development.

An FCEV (fuel cell electric vehicle) is an electric vehicle where a fuel cell provides the electricity to keep a small battery pack charged to power the vehicle. Fuel cells run on hydrogen and produce water vapor as the only exhaust, making FCEV's look like a great solution to the greenhouse gas implications of fossil fuel vehicles. What most skip over in this picture is that the majority of industrial hydrogen is extracted from natural gas, rather than from sunlight and water, which tarnishes the fuel cell clean image.

The companies, Daimler, Ford and Nissan, state their goal in collaborating is to develop a common fuel cell electric vehicle system while sharing costs between the companies. The primary result is expected to be a common fuel cell stack and fuel cell system, which each of the three companies will integrate into their own vehicles. The three companies are to pony up equal investments, and aim to develop commonality, leveraging volume production, to tap into economies in scale.

Another issue with fuel cell vehicles is the refueling infrastructure that is essentially non-existent. The press release issued by the three companies contains a nod to this fact by saying "The collaboration sends a clear signal to suppliers, policymakers and the industry to encourage further development of hydrogen refueling stations and other infrastructure necessary to allow the vehicles to be mass-marketed."

“Fuel cell electric vehicles are the obvious next step to complement today's battery electric vehicles as our industry embraces more sustainable transportation,” said Mitsuhiko Yamashita, Member of the Board of Directors and Executive Vice President of Nissan Motor Co., Ltd., supervising Research and Development. “We look forward to a future where we can answer many customer needs by adding FCEVs on top of battery EVs within the zero-emission lineup.”

“We are convinced that fuel cell vehicles will play a central role for zero-emission mobility in the future. Thanks to the high commitment of all three partners we can put fuel cell e-mobility on a broader basis. This means with this cooperation we will make this technology available for many customers around the globe,” said Prof. Thomas Weber, Member of the Board of Management of Daimler AG, Group Research & Mercedes-Benz Cars Development.

“Working together will significantly help speed this technology to market at a more affordable cost to our customers,” said Raj Nair, group vice president, Global Product Development, Ford Motor Company. “We will all benefit from this relationship as the resulting solution will be better than any one company working alone.”

brucedp wrote on January 28, 2013 - 8:59pm Permalink
Automakers like fuel vehicles. They do not like Electric Vehicles (EVs) that recharge off the public grid. FCVs (fuel cell vehicles) do not recharge off the grid thus can not recharge from renewable electricity. The hydrogen (h2) to fuel the fcv is currently coming from cracked natural-gas (cng - a fossil fuel source. Though methane can be generated from bio sources, no one is doing that when Canadian and Mexican CNG is so cheap). The h2 for use in a fcv has to be very clean, much cleaner than welding grade h2). On-board h2 tanks and their use is well designed and safe to use. In the past the Hindenburg scare from the ignorant public kept h2 down. h2 is compressed and kept on board at 5000, 7500, and the new 10000 psi is being used ieahia.org/pdfs/Compressed_Hydrogen_Infrastructure.pdf But the range of a fcv is less than a Tesla-S with a ~400 mile between recharges. fcvs are more like ~200 miles between refueling with h2. If the h2 were from environmentally benign sources (like cracking/separating water), instead of getting h2 from a non-renewable fossil source (natural gas), the electrical energy use to purify the water, electrolyze it, then compress it for putting into the fcv's on-board h2 tanks is much more wasteful than recharging a battery EV to drive the same distance. To go the same distance an EV can drive off 6kW, takes 15kW of electricity to create the h2 from cracked water. BTW, no one is talking about what they do with the carbon left over when they crack CNG to get the h2 (there are four hydrogen to one carbon in CNG, the formula is CH4). The rare earth elements needed for making Fuel Cells is limited and mostly come from China. Not only is there not enough of the needed rare earths for everyone to drive an fcv, Chins is going to limit the export as it has on many of its rae earths. Even China knows fcvs are a waste of time as li-ion battery EVs are much more available and cost effective. Is it that the Automakers want fcvs so badly? No, they want them to divert R&D money from EVs, and to eventually fail. Then they can go back to selling petrol vehicles as before at a high profit. All the while saying "Well, we gave it our best shot and it did not work ..." = Automaker BS, just like around 2000 when GM killed their EV1. Is it that Automakers like running off CNG. No, otherwise they would sell CNG vehicles. I have driving Automaker designed and built CNG vehicles. They are a great reactionary driving vehicle (go here, go there, on a moments notice ...). EVs are for those people who have a daily routine (work, school/shopping, home, ... repeat). The public needs to take a few steps back, and not listen to the Automaker talking-heads and find out why the Automakers are pushing fcvs, when they should be making CNG vehicles. Then the public will have a choice: CNG, plugin hybrids that can run off CNG or petrol, EVs, (+more). {brucedp.150m.com}