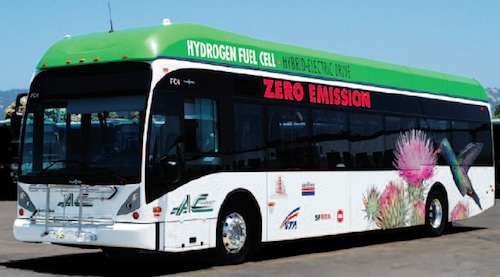 This is a significant advance because, currently, the majority of hydrogen production involves extracting hydrogen from natural gas using a reforming process. While running hydrogen through a fuel cell is extremely clean, if the hydrogen comes from natural gas that makes it not entirely clean. However, using solar electricity to extract hydrogen from water implements a fully clean energy system where water is converted into hydrogen (and oxygen), hydrogen is stored on the AC Transit bus, and later hydrogen and oxygen is recombined in the fuel cell to produce electricity and steam (water). Fuel cells do not burn hydrogen, instead it is an electrochemical recombination of hydrogen and oxygen that produces electricity and water vapor. The electricity is used to drive an electric drive train, meaning that all fuel cell vehicles are electric vehicles.

AC Transit, whose service area covers Alameda and Contra Costa Counties, has been experimenting with fuel cell driven buses since the late 1990's. AC Transit General Manager David Armijo said, "For over a decade, AC Transit has been developing the most comprehensive, zero-emission, fuel cell transit program in North America, and operating zero-emission buses in real-world service. Now, with increased fueling capacity, we have a greater capability to offer clean, quiet, zero-emission transportation to the communities we serve."

The fueling station was engineered by Linde North America, and uses the C-Series Fuelgen solar-powered electrolyzer by Proton. Part of the installation is a 510 kilowatt DC solar photovoltaic system, and part of the power will be used to drive the electrolyzer. AC Transit is due to receive a half million dollars in rebates from PG&E through the California Solar Initiative (CSI) program The fueling station includes advanced compression and dispensing technology that allows buses to be refueled at rates up to 5 kilograms/minute, which is claimed to be comparable to the refueling rate of a diesel bus.

Thanks to a grant from the California Air Resources Board, one of the hydrogen dispensers owned by AC Transit will be publicly accessible for fueling hydrogen fuel cell electric passenger cars. While hydrogen fuel cell cars aren't being mass produced, a few prototype units are driving around, including in the SF Bay Area.

"We believe the future of energy is here and embodied in the fuel cell buses operated by AC Transit," said Joe Triompo, Vice President and General Manager, UTC Power. "With multiple fuel cell buses in operation today, AC Transit and the community they serve are already reaping the benefits of superior efficiency, increased reliability and reduced emissions for environmentally responsible operations."