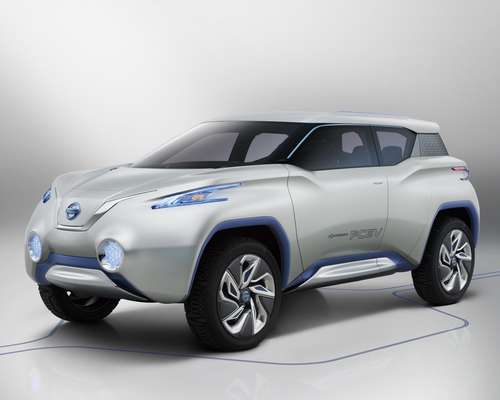 Proving that fuel cell technology has not been forgotten, Nissan released a preview of the Nissan TeRRA Fuel Cell SUV concept vehicle that will debut at the 2012 Paris Auto Show.
Advertisement

The Paris Auto Show is coming up, and that means the automakers are releasing previews of the vehicles to be shown at that show. This morning Nissan released a preview of the Nissan TeRRA Fuel Cell SUV concept vehicle. Billed as "the one and only Zero Emission SUV," it has a 4x4 electric drive train, a new fuel cell stack, and an exterior design that looks like a cartoon caricature of muscularity.

"Our challenge was to take Nissan's strength in SUVs and crossovers forward into the zero-emissions era, fuel cells being our new frontier in zero emission mobility" said Francois Bancon, Nissan's devision general manager of product strategy and planning. He went on to make this confusing statement "Not big and tough for the desert, the aim was a new approach to SUVs that's relevant to urban life," making it unclear whether the performance of the TeRRA Fuel Cell SUV is too weak for typical SUV tasks like driving across the desert or hauling boats. It is clear that Nissan is billing this as an "urban SUV" inspired by other "urban-relevant SUV's" in Nissan's stable like the Murano and Qashqai.

Shiro Nakamura, Nissan senior vice president and chief creative officer describes the design style as "Exploring our imagination of that natural space with the exterior, we have redefined the power of the SUV heritage in a much more athletic way, one that expresses our vision of the zero emissions future. You have the big tires, high belt-line, thick pillars and thin side windows of the SUV vocabulary. But with a slender waist between pronounced fenders above the wheel arches, and a sculptured hood, we've created an 'Implied Structure' of musculature under the skin. Sharp corners, short overhangs and sculptured lamps contribute to a clean, confident stance. An aerodynamically flat body pan in an eye-catching color, protecting the full length of the underside, completes the image of what we call 'Modern Toughness.'"

The interior features seats that can be folded down to make a completely flat floor, allowing for a flexibly used cargo area to carry items such as "bikes, kayaks or assemble-yourself furniture from Scandinavia."

The choice of a fuel cell for the drive train may appear strange given all the interest in electric cars today. All the automakers are working on fuel cell research, perhaps in the insane hope that fuel cell refueling infrastructure problems will one day be resolved. (hint: there is zero infrastructure for distributing hydrogen, whereas there is a large entrenched infrastructure to distribute electricity) In any case, the new Nissan fuel cell stack is a flat, highly compact unit that features world-leading power density of 2.5kW/L. It is the latest in a series of fuel cells designed by Nissan since 1996, and has 1/6th the cost of its predecessor in 2005 thanks to a dramatically reduced need for materials such as platinum.

Tesla Contemplates A New Strategy for China Retail even As Sales Boom
Jay Leno on Elon Musk & EVs: “I Think He Should Get ... Credit"
END_OF_DOCUMENT_TOKEN_TO_BE_REPLACED