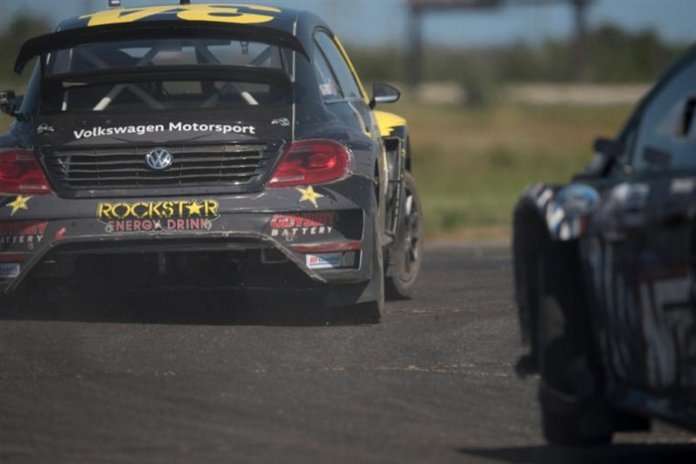 Tanner Foust enters this weekend's edition of the Red Bull Global Rallycross stop at Bader Field in Atlantic City with a target on his back. Foust's teammate on the VW-Andretti Rallycross team Scott Speed is only 26 points behind Foust for the lead in championship points.
Advertisement

As the Volkswagen Beetles that make up the Volkswagen Andretti Rallycross team head to Atlantic City Saturday, drivers Tanner Foust and Scott Speed are looking to extend their leads in the overall driving championship.

Entering Saturday’s event, Race 1, Foust sits in first place in the race for the driving championship while Speed is comfortably in second place. Volkswagen is in good shape, if their pair of drivers gives a good accounting of themselves, to clinch its second-straight Manufacturer Championship as the automaker is comfortably in the lead. The weekend doubleheader will see Race 2 on Sunday.

Speed sits only 26 points behind his partner, Foust, in the race for first place. Speed reclaimed a solid hold on second place following a convincing win at last month’s Indianapolis event. Incidentally, the Indy run was also the VW-Andretti World Rallycross Team’s home race. Speed, the pilot of the No. 41 Oberto Circle K Beetle GRC now shares the title as the Red Bull Global Rallycross’ winningest driver with teammate Foust. Speed is hoping for a win at Atlantic City to propel him ahead in championship points as the Rallycross season heads into its final three races.

“Last year, we got an important win here in Atlantic City, so I’m hoping that good luck can continue this time around. If we can keep plugging away like we have been recently, I’m confident that we can come out of this weekend with two good results,” Speed said in an interview during preparations for the event.

Foust, who has had a victory drought since June hopes he will break out of his slump and stand atop the podium as the winner of one or both of the weekend’s events. Foust drives the No. 34 Rockstar Energy Drink Beetle GRC. Foust feels like he has some unfinished business to clear up, entering the airfield circuit at Bader Field.

“We were having a great race here last year until a big hole hit us with just a couple of laps from the checkered flag. The key to this weekend will be avoiding problems. There are a lot of points on the line, and we know we need to grab as many as we can,” Foust said in his interview.

The doubleheader will air live on NBC beginning at 5 p.m. Saturday and 4:30 p.m. Sunday.

LG's New EV Battery Plant Is a Welcome News for Tesla
Tesla Giga Berlin's New Hurdle: It's Not Only the Gov't, but Now Tesla Itself
END_OF_DOCUMENT_TOKEN_TO_BE_REPLACED