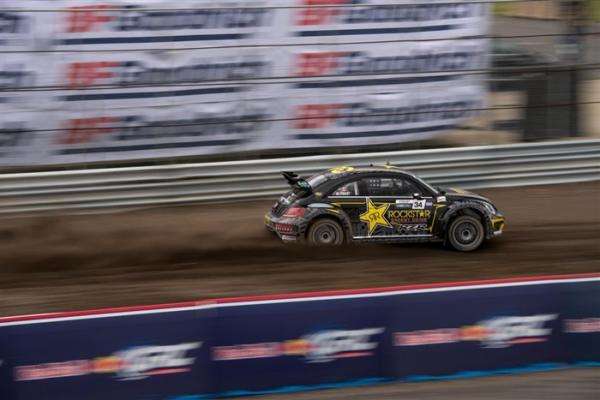 The Volkswagen Andretti GRC World Rallycross team had a good weekend at Thompson Motor Speedway in Connecticut. Scott Speed, the championship points leader, scored two second place finishes (he was stuck in the middle and had to do some fancy driving to obtain his place on the podium. His teammate Tanner Foust cruised through proceedings Saturday and was doing very well Sunday when he lost a wheel, just three laps from the finish line in the Final.
Advertisement

It was a weekend of frustration for the Volkswagen Andretti Rallycross Racing Team as series-leading driver Tanner Foust saw a perfect session nullified when he lost a wheel in Sunday’s Final.

Until that event, Foust had run a picture-perfect doubleheader race session – Saturday’s racing was independent of Sunday’s at Connecticut’s Thompson Speed Park. Scott Speed, Foust’s teammate, found himself in trouble from the start of the racing weekend. Ultimately, he ended up with a pair of second-place finishes, not quite what he had in mind when the weekend began. Subaru has good weekend taking podium in Sunday's final.

On Saturday, Foust was the toast of the field on Saturday as he set the fastest time in qualifying and then went on to take every race on the first day of racing. With his victories, Foust earned the maximum number of points toward the driving championship. In setting the fastest qualifying time, Foust was more than a second quicker than any other driver in the field.

Driving the No. 34 Rockstar Beetle GRC the driving ace notched his first win of the season on Saturday. Sunday’s action saw Foust having a repeat performance. The point-leading driver was the class of the field, leading the qualifiers and Final. Foust, taming the new course, led in the second Final of the weekend until just three laps from the finish when he lost a wheel, leaving the Beetle out on the track.

Meantime, Scott Speed, reigning series champion, struggled the entire weekend to earn respectable second-place finishes. In the first race series on Saturday, there was a qualifying mix-up that left Speed, piloting the No. 41 ORAFOL Beetle GRC, seventh on the starting grid. Driving a clean, fast race, he managed to recover to win the second-round Heat, eventually claiming victory in Semifinal B. The victory in the Semi earned him a front-row starting spot, next to Foust.

Trouble continued to plague Speed. Speed’s was driven into the tire barrier by another competitor, causing a red flag to come out, stopping the traffic. The overzealous offending driver was penalized and moved to the back of the revised starting grid. Speed retained his second-place starting position. On the restart, Speed fell back into the field, but, he made a thrilling last-lap pass to earn second.

Speed’s teammate Foust looked forward Sunday to a repeat of Saturday. The 12-time race winner seemed to be headed in that direction, on track for an unprecedented perfect doubleheader, until his Beetle GRC had its wheel failure.

Also in Sunday’s Final, Speed was in catch-up mode again. He was mired in the middle of the pack for much of the race. He also knew that his car was quicker that the competition. Because of that edge, he saved his Joker Lap shortcut for the lap, passing several cars to take second. With his finish, he regained the championship lead, having lost it earlier on Sunday to Foust.

“It’s really tough to be so quick all weekend and to have the track decide to take a bite out of the car at the end of the Final,” said Foust. “We dodged issues all weekend long and were super fast, so I’m bummed Sunday had to end like this. At least we know we’re quick, and I’m hoping to replicate most of this weekend at the next doubleheader in Ottawa.”

“Two second-place finishes are not where exactly where we want to be, but it’s good points for the championship, so we have to be somewhat happy,” said Speed. “Starting at the front of the pack is always so much easier, but we showed we know how to get through the field and make things exciting, so I guess that’s a positive too.”

Volkswagen Andretti Rallycross will be back in action for the international leg of its season with another doubleheader weekend in Ottawa, Canada June 17-18. Both races will be broadcast live on NBC with Race One airing at 10 p.m. on June 17, and Race Two at 4 p.m.

Toyota vs Tesla: Which Stock To Buy These Days
For Some Former Daimler Managers Daimler Is Authority, While Tesla Is Like a Startup
END_OF_DOCUMENT_TOKEN_TO_BE_REPLACED