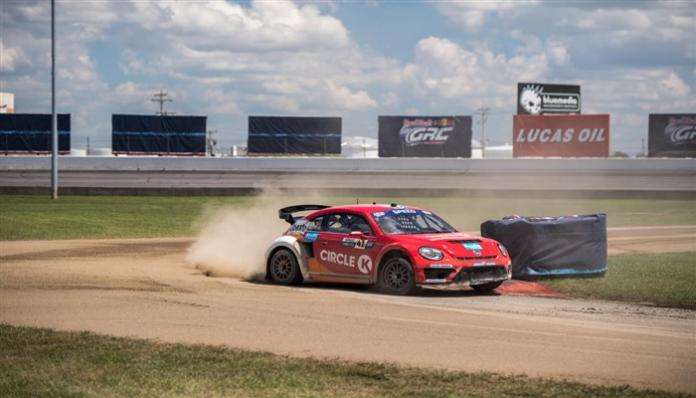 The VW Andretti Global Rallycross team continued its winning ways with a 1-2 finish for drivers Scott Speed and Tanner Foust, pilots of the Beetles that took the event. The win helped VW to extend its lead for the manufactuer's championship while Speed regained sole possession of second place in driver points following first place Foust.
Advertisement

Sometimes it seems that returning home is the best thing that can happen to you. It’s what happened to Scott Speed, a member of the Volkswagen Andretti Rallycross team, at Indianapolis’ Lucas Oil Raceway. Speed, the current Red Bull Rallycross champion, dominated the weekend’s racing, taking firsts in Sunday’s Semi and Final.Drivers talk about the race.

Tanner Foust, the other member of the VW Andretti crew, and current points leader in the racing series, placed second to his teammate. Their 1-2 finish marked the fourth time the team has scored such results in 2017.

Driver on a mission as he took first

Speed was on a mission as soon as the weekend began by setting the fastest qualifying time and winning each of his prelims as he went on to haul in the maximum number of points for the weekend.

“What a great way to celebrate our team’s home race with a commanding 1-2 finish,” Speed said after the contest. “We knew we needed to get the most out of this weekend to help our championship hopes, and that’s just what we did. I couldn’t be prouder of the Volkswagen Andretti Rallycross crew, and I’m looking forward to keeping this momentum rolling.”

Foust’s time racing wasn’t as simple as his teammate’s as he was stuck mid-pack in his Heat race and he had to inch his way forward, working his way through the rest of the field as his No. 34 Rockstar Energy Drink Beetle GRC was more than a match for the other entries. Ultimately, Foust was able to gain a second-place finish.

“We had a tough weekend on this side of the garage but fought through for a bunch of good points. We didn’t get the result we wanted, but I know that we can get back on the right track for the rest of the season and I’m proud of all the Volkswagen Andretti guys who put on a great show in front of their friends and family,” Foust said in a post-race interview.

Speed’s weekend sweep let the driver of the No. 41 Oberto Circle K Beetle GRC retake second place in the points standings behind his teammate. Volkswagen’s lead in the manufacturer’s championship standings continues to grow with its latest victories.

The next time the Volkswagen Andretti Rallycross cars take to the track will be Aug. 12 and 13, their second annual visit to Atlantic City for a doubleheader. On Aug. 12, NBC will carry the racing live at 5 p.m. On Aug. 13, the competition begins at 4:30 p.m.