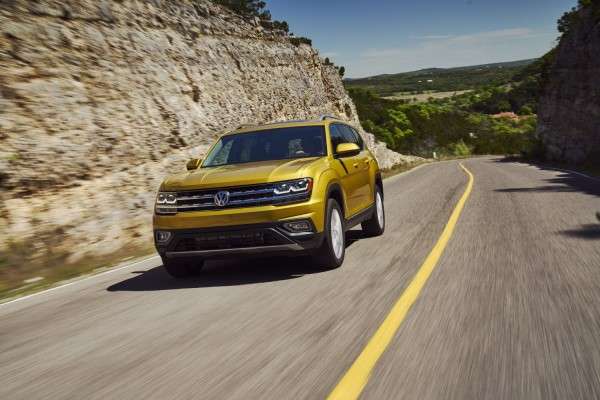 Leaving its emission cheating behind, Volkswagen reported a big sales bump in September. Led by its SUVs, Tiguan and Atlas, which make up 26 percent of its overall sales, VW has posted more than a 9 percent year-to-date sales increase, as well.
Advertisement

Volkswagen, which was dogged by the Dieselgate scandal for more than a year, has firmly put the emissions scandal into its rearview in the U.S. market as the automaker reported September sales of 32,112, a 33.1 percent increase over a year ago.

In addition to the big monthly jump, the automaker reported that its sales for the year-to-date are also up substantially. Through September, Volkswagen dealers delivered a total of 252,456 vehicles, a 9.2 percent over the same month last year.

A key factor in Volkswagen’s sales rebound has been its lineup shift. One of the results of the emissions scandal was a promise by Volkswagen Group headquarters in Wolfsburg, Germany, that its American subsidiary would get some vehicles tailored to the American market. The first such vehicle was the Atlas. Volkswagen, which has always kept marketing decisions firmly in Germany, decided that America could handle decisions for its market. Atlas is manufactured in Chattanooga, Tenn., sharing an assembly line with, among other models, the Passat.

In light of this decision, Volkswagen allowed VW of America to take over the marketing and naming of the three-row crossover that was developed specifically for the U.S. market. Though Volkswagen crossovers have traditionally had names beginning with T – Tiguan, Touareg – Wolfsberg said America could give the three-row, full-sized crossover a moniker in keeping with U.S. tastes. Volkswagen of America named it the Atlas, after consulting with its dealers.

Released in June, Atlas began to sell strongly, and it has kept up the pace. For September, the all-new Atlas totaled sales of 4,095 vehicles. Also, the longer Tiguan, built on the same platform in Germany, had sales of 3,075 units. Sales have continued strongly since both vehicles were released. Tiguan, which is selling beside the renamed Tiguan LTD, was released in July.

Volkswagen of America has radically changed its marketing strategy. Recognizing the continuing strength of the SUV/crossover market, VW has shifted its lineup to offer more family-friendly SUVs. The results of VW’s insightful move have proven beneficial.as they accounted for more than 26 percent of VW’s total brand volume.

Also, sales of the Golf family received a with the addition of the Golf SportWagen and GTI. In sum, Golf accounted for 5,685 models delivered. What it represented was an increase of 24 percent for VW’s award-winning subcompact family.