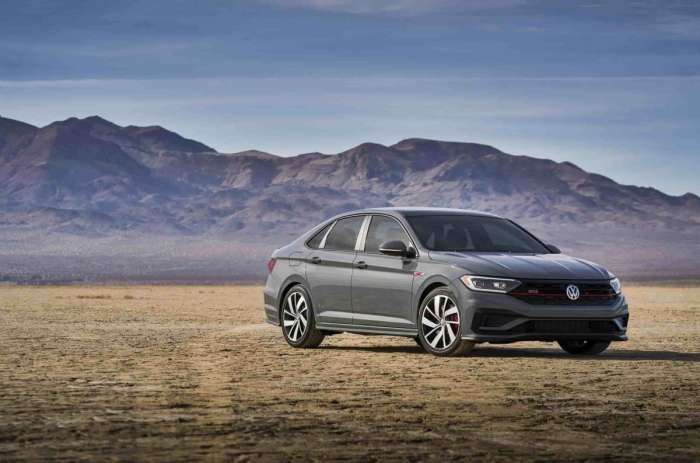 Volkswagen used Wednesday to announce the pricing for the 2019 Jetta GLI Series.
Advertisement

Believe it or not, it has been 35 years since Volkswagen launched the Jetta GLI. Marking the anniversary, the automaker announced full pricing info on the GLI lineup. Indeed, today’s GLI ups the ante through unique styling, sharper handling, more power, and more standard features. Deliveries are expected this summer.

Today’s GLI uses a 2.0-liter four-cylinder turbocharged and direct-injection EA888 TSI® engine. Though you do have to used premium fuel, the engine cranks out 228 horsepower and 258 pounds-feet of torque. This engine gives the driver 18 more horsepower and 41 pounds-feet more torque than the previous GLI. The engine is from the Golf GTI. It features variable valve timing on the intake and exhaust sides, as well as variable exhaust valve lift.

VW still uses a standard six-speed manual to move the power from the engine to the front wheels. For those who don’t want to mix things up, there is also an available seven-speed double-clutch transmission. Automatic tranny models come equipped with a Start/Stop system designed to improve fuel efficiency. This technology stops the engine during idle when the brake pedal is pressed and held (waiting for a light to change, for instance). When the brake pedal is released the engine restarts. EPA-estimated fuel economy for the GLI is 25/32/28 (city/highway/combined) regardless of tranny choice.

The Jetta GLI features an independent sports suspension with a strut-style setup at the front and a multi-link
arrangement at the rear. The front brakes -- also shared with the Golf GTI and Golf R – are 13.4-inches diameter vented brakes. Like the GTI, the GLI uses the VA electronically controlled, torque-sensing limited-slip differential that helps to eliminate understeer, as well as variable ratio electric power-assisted steering. A 35th Anniversary model uses the DCC® adaptive damping system.

Driving Mode selection comes with the GLI. It allows drivers to customize their vehicle’s dynamic behavior. The system uses four modes in non-DCC vehicles – Normal, Sport, Eco, and Custom. The modes operate like this:

The Jetta GLI model comes with the People First Warranty, America’s Best Bumper-to-Bumper Limited Warranty. This warranty features a pair of Volkswagen firsts. The warranty provides covered for six-years or 72,000 miles (whichever comes first). And, the warranty can be transferred to subsequent owners and remain in force throughout the remainder of its duration.

The Jetta GLI is available at four price points. The points are: