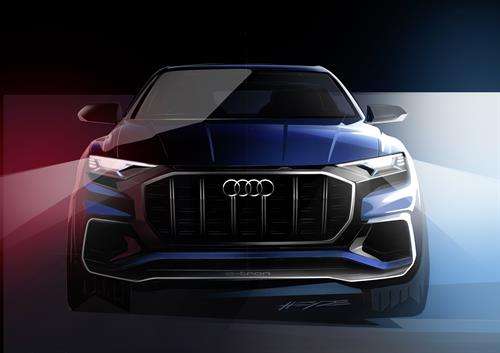 Spy photos have shown that when Audi debuts its "near-production concept" Q8 large crossover at the North American International Auto Show in Detroit next week is much more than just a concept car, it's the real thing.
Advertisement

When the doors to the North American International Auto Show (NAIAS) open next week, Audi will be showing a vehicle that is said to be a “near-production concept,” the Q8. Well, so much for the “concept” piece because a group of car spy photographers, apparently hiding in the bushes at the side of a snowy Finnish road, caught the camouflaged Q8 dashing through the snow as the drivers put it through its paces.

The spy photos that have appeared reflect pretty well the teaser shots that Audi put out last month. The photos confirmed, among other things, the crossover’s:

The spy photos also confirmed, said Automotive News Tuesday, that the Q8’s grille is much wider than the grilles on current production models. The roofline is flat. However, interior space has increased so there’s more than enough room for four. Audi has already said there are design elements that echo the 1980s UR-quattro. Most noticeable is the very flat and wide C-pillar of the crossover. The Q8 also features noticeably flared shoulders over the wheels.

The headlights and taillights, as illustrated by the spy photos, are nicely integrated with the brand’s identifiable “brand language,” said the trade publication. “With the Audi Q8 concept, we have created a new spearhead within our Q model line,” Marc Lichte, the automaker’s design chief, said last month. “Its design strongly evokes sportiness and prestige.”

With its launch expected next year, the Q8 will be built on an MLB platform (the automaker’s design language) shared by the Q7 crossover and the Bentley Bentayga.

In announcing plans for the Q8, Rupert Stadler, Audi chief executive, said the crossover would be aimed at markets like the U.S., China and the Middle East, where large crossovers whose designs evoke coupe styling “are in high demand,” Automotive News concluded.

Elon Musk Says Tesla To Offer Car Insurance in Texas Next Month, But These Challenges Exist
Tesla Co-Found Plans To Build a Battery Factory and Shift The Industry
END_OF_DOCUMENT_TOKEN_TO_BE_REPLACED