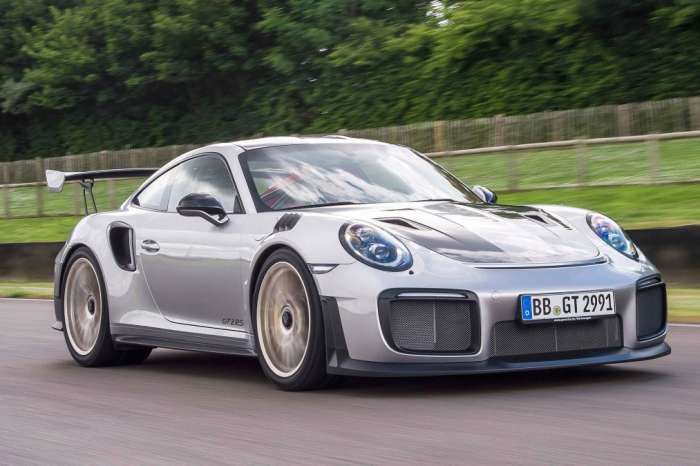 Nearly half-a-century ago, Mark Donohue set a lap record at Road America as he was getting ready for a race. This week his son David set a different record at the same track. Yes, there was a difference in the time, but the vehicles didn't match, either.
Advertisement

You know there are times when families become associated with certain feats. In the case of Road America, the feat is speed and the family name Donohue associated with it. Indeed, if you are a student of history you will probably know that Mark Donohue, a famed racer driver of the 1970s set a record at the 4.0-mile, 14-turn track in Elkhart Lake, Wisc. And, just this week, Mark’s son David set another mark at the same track.

Cars Different As Day And Night

The two cars were remarkably different, as was the power they put down to the wheels. The record-maker this week is Porsche’s 911 GT2 RS, a 700-horsepower two-seater. The 1973 record-setter was a monster Porsche 917/30. That open single-seater cranked out 1,580 horsepower.

Interestingly, the GT2 RS set a mark of 2:15:17, while the 1973 Can-Am racer piloted by his Dad laid down a record of 1:57.52. The difference is that the GT2 RS isn’t set up as a racing vehicle. It is a production car, while the 917/30 was being set up for the race at Elkhart Lake that year. Reportedly, the racer Mark was piloting helped to end the limited-racing rules at the time to lay down the blistering lap.

Equally as interesting to modern race fans is the fact David, a factory driver for Porsche, was able to dial in the GT2 RS and set the record in only a few laps, while it did take the Can-Am racers of nearly half-a-century ago, several practice runs to get the racer set up and dialed into its high-speed run. Indeed, Mark set the record during a practice session.

Speaking of records, Porsche just last month set a lap record at Porsche Sets New Road Atlanta Mark.. However, notes Car and Driver, “Porsche had better keep setting these records because there is a slew of production cars either already out of soon-to-be-out including the McLaren Senna, Mercedes-AMG One and the Aston-Martin Valkyrie that are effectively going to shatter every record and give Porsche a taste of its own 917/30 medicine.” You know, though, that Porsche won’t take anything eclipsing its record lying down. Porsche’s famed Skunk Works may have something that we still don’t know about coming, but it will be there, no doubt, to recapture any records that are broken.