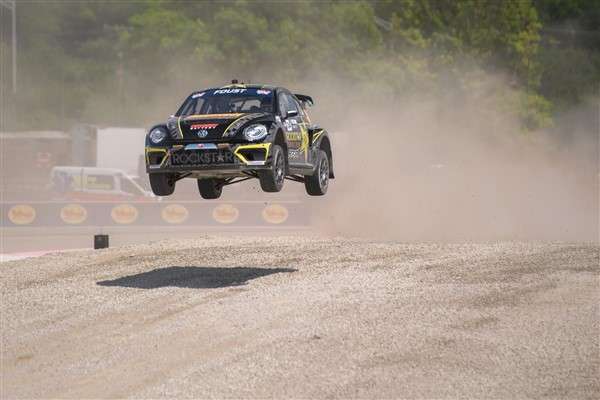 The weekend stop at Louisville turned into a thriller as VW Andretti Rallycross team holds onto third-place win and four-place finish.
Advertisement

Speed quickly settled into his weekend of racing, setting fast times during his practice runs Saturday morning. He held pole position in the Qualifier until teammate Foust quietly moved into that position, bumping Speed to the outside.

Speed and Foust Had Successful Runs In The Heats

Speed had quick success taking his two Heats, while Foust had his success in Heats 2A and 3B. This set up an interesting dynamic for the Semis and the Final on Sunday.

During the semis, VW Andretti Rallycross drivers started at the front of the grid. They earned a pair of victories, making things interesting as the racing entered the Sunday afternoon Final.

Things became more interesting on the relatively new .66-mile track as the rain began to fall, setting up some treacherous driving conditions. Indeed, an already challenging oval became even more.

As the green flag dropped, Speed and Foust had great starts. However, the Volkswagen Andretti Rallycross teammates were shunted to the middle of the pack, fighting the muddy center section of the track. Speed and Foust were forced to jockey for position for much of the 10-lap battle.

The pair settled into a rhythm that caused them to err on the side of caution as they worked to protect their growing lead in championship points. Because they had to take a conservative approach, the pair had to settle for a third-place finish (Speed) and a fourth (Foust).

“Our race went according to plan until contact knocked me off the track,” said Foust, the pilot of the No. 41 Oberto Circle K Beetle GRC, in a post-race interview. “It was really, really fun racing, and I guess this weekend proved that we can fight back from the middle of the pack and don’t have to start up front to do well.” Foust was understandably disappointed with his fourth-place finish, following his strong performance in the qualies and prelims.

Scott Speed, the third-place finisher in the No. 34 Rockstar Energy Drink Beetle GRC said the weekend was crazy “with the weather changes." It was "just an absolute battle out there. In the Final, I couldn’t see much, and it felt a lot like bumper cars. It was honestly just mayhem in the mud.”

Speed’s third-place extended the Volkswagen Andretti Rallycross team’s streak of podium finishes to nine straight races, dating back to Daytona last year. After their finishes in Louisville, Speed and Foust are holding onto their positions in the race for the championship with Speed ahead of Foust on points.

The next stop for the GRC Series is Thompson, Conn where they will hold the first doubleheader weekend of the 2017 season. The weekend of June 3-4 will see major races on Saturday and Sunday. NBC will broadcast Race 1 at 5 p.m. June 3 and Race 2 at 5 p.m. June 4.