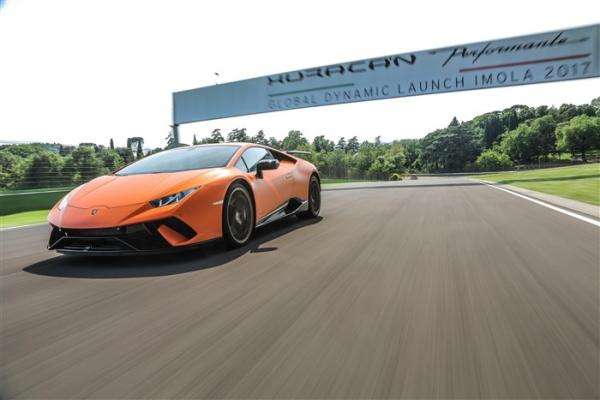 Lamborghini, on the strength of its active aerodynamic system, has received the prestigious Innovation Award from the U.K.'s Autocar magazine.
Advertisement

In the last couple of years, Lamborghini’s Huracan has won many awards for its design and performance. A subsidiary of the Volkswagen Group, the stylish limited-edition supercar, the Huracan clings to any road surface as if there were glue on the wheels, while also delivering blistering 200-plus mph driving performance. Typical performance for the Huracan is 2.3 seconds to hit 60 from a standing start and a high end that’s in the 213-mph realm.

Award Made At Fitting Location – Silverstone

At Silverstone, Maurizio Reggiani, Lamborghini’s board member for research and development, received the prestigious Innovation Award from the U.K.’s prestigious automotive publication Autocar.

Mark Tisshaw, the Autocar editor, said the Huracan Performante’s active aerodynamics system “demonstrates intriguing innovation.” The aerodynamics system impressed Autocar’s panel of internal reviewers because it has “broken new ground.”
Tisshaw and other editors took the wheel of the high-performance machine during its launch to verify that the “active aerodynamic system takes dynamic handling to a new level.” Their time behind the wheel confirmed their earlier impressions. Tisshaw enthused that the publication’s review panel “can also vouch for the remarkable performance of this naturally aspirated” supercar.

Reggiani, in remarks at the presentation, said that Lamborghini is “very proud to receive formal recognition from a prominent and respected U.K. automotive publication.”

Huracan Sets Lap Record At Nurburgring
He said that the Huracan’s performance capabilities have already been proven by the lap record a production copy of the Huracan Performante set on the Nurburgring’s “North Loop,” one of the most demanding circuits in racing.

The challenging 14-mile loop includes not only some hard cornering, but it also includes a massive drop as the road surface descends through “the Woods.” Reggiani concluded his remarks by noting the award provides additional acknowledgment of the Huracan’s handling prowess. The handling package, Lamborghini’s patented Aerodinamica Lamborghini Attiva (active aerodynamics) also verifies the “talent of our R&D and design team,” he concluded.