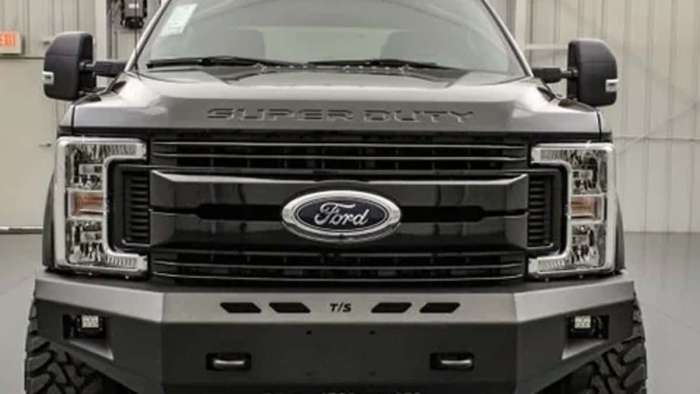 The guys at Salina, Kansas' Long McArthur Ford certainly know how to something special out of a pickup. They have done it several times this year and are continuing their string.
Advertisement

Over the last few months, the special Ford F-Series pickup trucks created by Long McArthur Ford of Salina, Kansas, have been featured here on Torque News. The folks at Long McCarthur specialize in looking at current types of Ford F150 and Super Duty trucks offered by Ford, and then by adding a few parts here and a couple of pieces there, they turn them into unique pickups. Take another vehicle, the model they call the Sidewinder. It starts life as a Ford F150 with the STX Appearance Package and adds to it.

For example, not too long ago, they brought back two-tone Ford F-Series pickups like the trucks of the 1990s. They began with a rear base color and then added the second color, making them unique. And, again, the dealership then added flair to the Ranger. The changes made the Ranger more like the Ranger Raptor that offered in Europe. The dealership calls it the Ranger Baja.

Now, they have done it again with a pickup based on a 2019 Ford Super Duty F350 DRW. The dealership calls it their Ford F350 Mac Truck DRW. Let’s look more closely at the three-quarter-ton pickup. For starters, it is equipped with a second set of rear wheels, making it a dualie. Then, the crew at Long McArthur added a 2.5-inch suspension leveling kit, paired with Fox 2.0 shocks front and rear. And, there’s a duel Fox front stabilizer. The work truck rides on Mac Truck 22-inch Forged black wheels shod with Toyo MT 37-inch tires.

The customized F350 Super Duty features Mac Truck front and rear bumpers and specialized graphics on the side. The bumper has LED lights within. The pickup’s interior features a custom leather finish with heated seats.

Among the other significant features is a set of WeatherTech floor mats, a blacked-out front grille, four-wheel alignment, rounded out with a speedometer recalibration. The Super Duty also features running boards and a fifth-wheel prep package. The engine is a 6.7-liter Power Stroke V-8 turbo diesel mated to an automatic transmission. Four-wheel-drive is standard.

Package Is Worth It

These changes are not inexpensive. On top of a $58,920 basic vehicle price, the dealership adds its pieces for $19,995. The extra parts bring the selling price up to $78,915 before any discounts. Since the dealership discounting the pickup by $4,000, the cost out the door is $74,915. A five-year, 60,000-mile warranty covers the changes and parts. For more information, contact Long McArthur Ford, Salina, Kansas.

Marc Stern
has been an auto writer since 1971. It was a position that filled two boyhood dreams: One was that I would write, and two that I write about cars. When I took over as my newspaper’s auto editor, I began a 32-year career as an automotive columnist. There isn’t much on four wheels that I haven’t driven or reviewed. My work has appeared in Popular Mechanics, Mechanix Illustrated, AutoWeek, SuperStock, Trailer Life, Old Cars Weekly, Special Interest Autos, and others. Today, I am the Ford F150 reporter for Torque News. I write how-to and help columns for online sites such as Fixya.com and others. You can follow me on Twitter or Facebook.