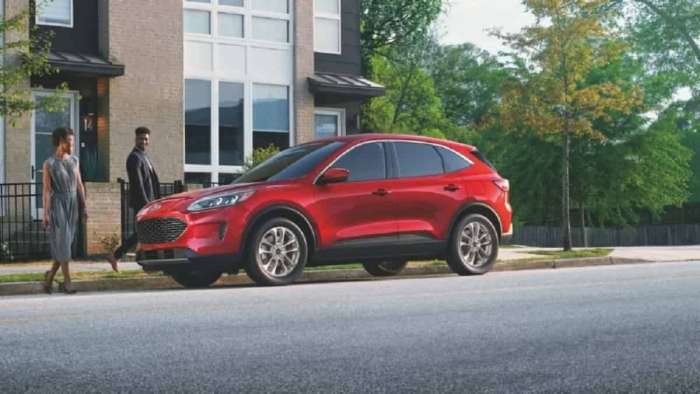 In another safety recall, Ford has recalled nearly 100,000 2015 Escapes to fix a potential rollaway problem due to a problem with a transmission cable bushing.
Advertisement

If there is one thing that you have to be sure of when you are behind the wheel, it is that when you shift into Park, the vehicle stops and doesn't move. What happens when you go into Park is pretty simple:

The Way The Transmission Works

The transmission sets a pawl that grabs the driveshaft to keep the vehicle from moving. At times it can be disconcerting. You have likely experienced the breakneck stop if you hit the brakes, stop suddenly, and slam the vehicle into Park. At that time, the vehicle can rock to a stop that can be jolting unless you are expecting it.

Though most drivers think the way to stop and Park a vehicle is by hitting the brakes and putting it into Park. It is only part of the action.

The correct way to stop a vehicle is to bring the vehicle to a stop with the brakes. Then, when the vehicle stops, you place the vehicle into Park and set the parking brake. If there is a problem with the Park setting, your vehicle will remain in one spot and won't become a hazard by rolling should the pawl not fully engage.

Ford has a problem with nearly 100,000 2015 Escapes. A damaged or missing bushing in the transmission may prevent the vehicle from shifting into the right gear, leaving it to roll in an unexpected direction. And, the vehicle could roll after the driver selects Park. In either case – the wrong gear or the going into Park – the vehicle faces an increased risk of causing a crash or an injury.

The vehicle that this applies to is the 2015 Ford Escape, equipped with the 2.0-liter four. A bushing that attaches the shifter cable to the transmission can degrade and detach, leaving the vehicle unable to shift into the selected gear or Park.

Owners of 2015 Ford Escapes will receive their recall notifications from Ford shortly after May 9. When they have received the notice, owners of the affected Escapes can schedule a service appointment with a dealer to have the problem checked out. Dealer technicians will inspect and replace the underhood shifter bushing. And they will add a protective cap over the shift cable bushing. The repair is free.

For more information, Escape owners can contact Ford customer service at 866-436-7332. Ford's number for this recall is 22S25. Or, owners can contact the National Highway Traffic Safety Administration (NHTSA) Vehicle Safety Hotline at 1-888-327-4236. Or they can go to the safety agency's website at www.nhtsa.gov. The NHTSA identifier for this is 22V254.