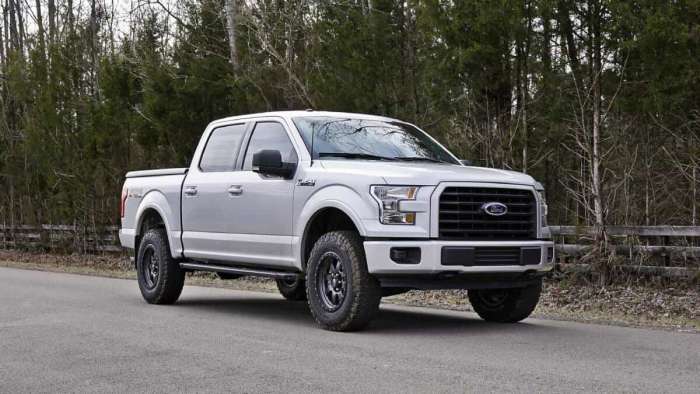 Do you know how to set the payload for your Ford F150? Here's an explainer that should help you out.
Advertisement

Whether you have just purchased your first F150 or you are an old-hand at owning the popular Ford pickup, there are certain things to remember before you head off for a weekend of off-roading or camping or buzzing around a short track or maybe just a trip to the beach. For example, you may want to take multiple coolers with you, one containing food, water, ice, and the like and a second or third that contains beer and, perhaps, jerky and other consummables. Frankly, it’s a great idea to bring along more than one cooler, but, the more important question, one that supercedes whether you should, is whether you can.

To determine the amount of gear you to carry on your summer holiday, take a close look at the owners manual, paying particular attention to the vehicle’s payload. The payload is the amount of weight your vehicle can handle. Your owners manual discusses it about trailering so you may assume it affects your pickup’s ability to trailer. It is more than a trailering issue. For example, if your vehicle is specked out so that it can handle a trailer-load of 8,100 pounds at the hitch, many owners believe that the payload level is a function of the trailering capability. That’s not the case; payload is one function while trailering is another.

For 2019, the payload capability of an F150 varies with the model type from a low of 1,300 pounds to more than 3,200 pounds. You have to watch the total payload capacity for your vehicle – found in the manual or on a sign on the door frame. We will show you how to set up the maximum carrying capacity of your pickup in a bit. For now, suffice it to say, that if your F150 has a payload of 1,850 pounds, you can’t expect it to carry 2,000 pounds of cargo without consequences.

What are those consequences? Frankly, you will find that the more you trip over the payload limits, the worse the handling will be. It doesn’t matter whether you have stowed all of the equipment neatly in all of the storage bins and under the floor, as well as in the pickup box bed, or if the stuff you want to carry is all over the place, neatness doesn’t count here. Only the laws of physics and motion come into effect here. It’s not whether you are a good citizen, pay your taxes on time, brush and floss. The payload is a barrier you can’t cross. And, it has nothing to do with trailering, either. It is a standalone feature.

It’s true that when you first look at the seemingly endless pickup bed that you think you have endless amounts of space and weight available to you. Rest assured, you don’t. Indeed, you may have lots less payload available to you.

So what is the real definition of payload? There are several definitions of the term, most of which involve some rather arcane figuring to come up with the payload. So, let’s call payload what it is: payload is the amount of “stuff” a pickup can carry on any trip.

That’s pretty easy. It gets trickier when you start looking at the different permutations of the F150 from the basic XL to the top-of-the-line Limited. Ford has placed various warnings for an important reason: they warn you that there are hard limits to the payload. And, that going over the limit for your pickup will upset your F150’s handling.

Here’s an example. Let’s say you have a base model – if there is such a thing as a base model F150 as each one usually is sold with more equipment than just the base, no-frills pickup – and it has a payload of roughly 1,400 pounds.

Now, let’s say you have a normal family of two kids, a pooch, a spouse, and, perhaps an in-law or two. It wouldn’t seem as if you will compromise the payload limit, right? No, once you decided to include the in-laws and other equipment, you hit the payload wall quickly. Let’s look at the numbers:

Your family and all of their stuff come to 1,395 pounds. And, this is just the people in your life. Now, you can forgive yourself if you leave your in-laws out, though, we would doubt they would be particularly happy. And, you would gain 300 pounds for your pickup bed gear, but that’s it. You can’t load the trail bikes you might have wanted to bring, and you certainly cannot bring the gas grille for cooking. You’ll have to rough it with an old-fashioned charcoal grille. The trail bike (motorized) will weigh in about 175 pounds, and the gas grille will add another 100 pounds. And, this is without any accessories for them, at all. The trail bikes have their fluids, and the gas grille has its stuff, too.

In other words, your family and its gear have taken up your payload, leaving your pickup bed empty. It has to stay that way, too, unless you plan to re-distribute the load in the pickup bed (Ford does have flat storage under the rear seat of a SuperCab or SuperCrew Cab).

Here’s the thing, though, as soon as you go to the next the pricing point, the F150 XLT, you gain substantial payload that will enable you to take more.

Our point here is that the payload is a limit that you can’t violate without consequences. The consequences are an overly hard ride, poor handling, increased wear, and tear on your suspension pieces. You’ll also likely have problems on long hills where you have to brake many times on the way down, and your driveline (engine/transmission) will be taking a beating.

With all of this said, there is something you can do about it when you are purchasing your F150; it’s called upfitting. You can add a set of helper springs under the rear bed which have the effect of increasing the payload. And, you can add coil-over-shocks all the way around. And, you can order the long-bed version. Finally, you can order load racks for the bed to help spread out the load.

Now, how can these items increase the payload? It’s simple. The springs, for example, add to the body’s physical ability to take on the added payload. The same is true of the coil-over-shocks. A longer pickup bed means that there is more physical mass being added to the body, as well, so you can add the amount of payload that it can handle. Finally, you can add the load racks which affect only the payload-carrying capability. And, you might want to try a new set of wheels and tires, which will also help to increase the payload. Anti-Theft Specialist Shows An Interesting Hack.

Whatever way you slice it, the payload is important. You can’t ignore it. If you do, then there will be other issues for you to face. So, it is better to either keep to the limits of your particular F150. If you want more payload, you can buy a more expensive model; or you can upfit your truck to extend its payload. New Kit Gives F-Series Handling Bump. Either way, allows you to stay within your F150’s payload limits, which is a very good thing.Specialist Explains Ins and Outs of Wheel Offset.