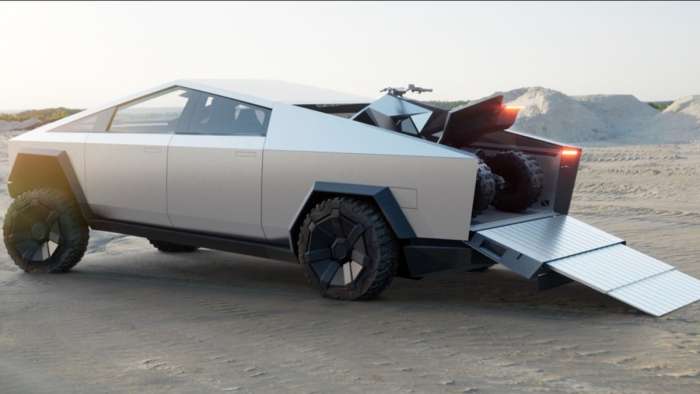 Even If the Tesla Cybertruck Wins New Truck-Pull Versus Ford F150, It Just Isn’t Pretty

When you come right down to it, there's very little that is appealing about the Tesla Cybertruck. The lines are not particularly pleasing; the angles are counter-intuitive, and you have to wonder if a committee of chipmunks designed it.
Advertisement

The headline for this article spells out the major issue for Elon Musk’s electric pickup, the Tesla Cybertruck. The team that designed and put the humungously hideous pickup together was either on drugs or came away convinced that every truck owner in the lower-48 states would toss their keys into the fire and double-down on someone’s idea of a hysterically funny joke.

Tesla Is Serious About This Pickup

Tesla doesn't see anything funny about the Cybertruck. It's doubtful that the design team is laughing, either. After all, would you laugh, if you designed a truck that others think is a huge joke? We doubt it. But, Tesla is serious about its weird-looking truck, as are many Tesla fans. Some 200,000 Tesla fans have plunked down their $100 deposits to reserve one of the first electric trucks that roll off the line. And, let's face it, while Tesla is serious because 200,000 is a lot of vehicles for them to make, Ford isn't. Why would the automaker be concerned when its pickup line -- the Ford F150 -- is at the top of the segment, a spot it has occupied for 42 years? And, while Tesla's numbers are significant for the electric carmaker, for Ford, the numbers are about one-fifth of a year’s production and sales of the F150 pickup lineup. It is hardly a contest.

Tesla has played this whole tug-of-war thing with a straight face as if there were some real validity to having a rigged test that showed the Cybertruck, Tesla’s electric pickup, winning out over a Ford F150. From the start, the truck-pull is bogus. Here’s why:

Tug-of-War Not A Real Comparison

Honestly, Did They Wheely Do It?

If you think, then, that the tug-of-war was fair, it wasn’t. This view was echoed by noted physicist Neil deGrasse Tyson who rapped the report fair truck-pull for many of the reasons outlined here.

With that said, though, Ford was quick to answer the challenge issued by Tesla for another truck-pull, and for two days it looked as if there would be a Ford-sanctioned event running a Ford F150 against the Cybertruck. However, the automaker scotched that thinking, saying in a statement that they would prefer to provide their current customers with the best experience possible and so they politely declined.

That hasn’t stopped Tesla, though, which is planning another truck-pull. It will probably one of the bigger non-events of next year as it only applies to the Ford world and Tesla aficionados. Whoever wins, it will gain bragging rights.

Only Bookies See This As A Major Event

Oh, and it will matter to British sportsbooks who have to believe that Tesla will win the next round of what could be arguably be called “Beauty and the Beast.” British bookies have handicapped the rematch and are giving odds to the Cybertruck over Ford. The issue, though, is the type of rematch. Another gasoline versus electric pas de deux won’t cut it. Instead, there are many on the internet, says The Ford Authority, who want to see the Ford F150 EV versus what is perhaps one of the ugliest trucks in creation. Indeed that is the matchup that makes any sense, at all. “We [TFA] don’t think Ford has anything to lose in the contest between two electric trucks. Even if the Cybertruck comes out on top, the Tesla is still horrendously ugly and will never appeal to most of the truck folks that have made the Ford F150 the top-selling vehicle in the country each year [42] for the last several decades.”

Tesla-Funded Research Reveals One of The Biggest Mysteries of EV Battery
Tesla Tesla Buyer Nets a Whopping $12,000 Discount After Asking for Reduction
END_OF_DOCUMENT_TOKEN_TO_BE_REPLACED