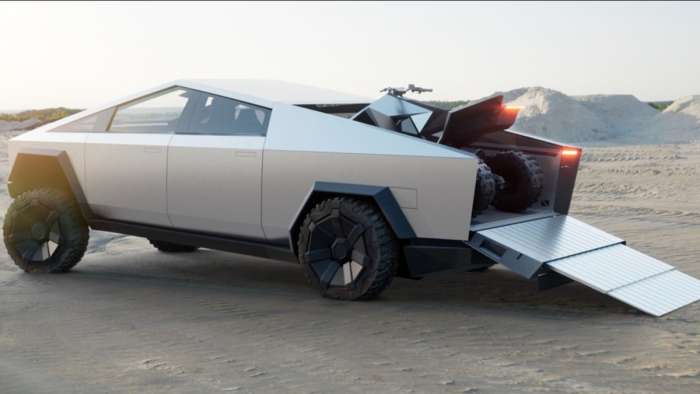 For all of the noise raised this week about the way the Tesla Cybertruck yanked a Ford F150 uphill quite easily with its wheels sort of spinning, the ending is a letdown. There also may have been more than a little underhandedness on Tesla's part.
Advertisement

It seemed to be on, folks. Two days ago, Elon Musk took up the gauntlet that appeared to have been tossed down by Ford over a new Ford F150 versus Tesla Cybertruck pull. However, Ford seems to have backed away from a rematch. You might wonder about a rematch of what? And it is an excellent question. It’s probably an event that many readers of Torque News missed in all of the back and forth about Elon’s highly unusual stealth pickup. This event came during the ballyhooed Cybertruck reveals that Tesla had touted for months. Indeed, during this reveal there were a couple of issues that no one talked about.

Is It A Stealth Pickup?

Why did we say stealth pickup? Look at pictures of the battery-powered truck. If you remember the introduction of the F117 stealth fighter-bomber in the mid-1980s, the Pentagon trumpeted the slow-flying fighter-bomber as radar-proof. The design of the fighter-bomber was angular with sides that flowed out of the airplane’s pyramid-like central section to its airfoil. There were many reversing angles in the stealth fighter that were coated with a radar-absorbing material, as well.

Now, while Torque News doubts that Tesla wrapped the angular pickup in radar-absorbing material, it does use extra-strength stainless steel in its body panels. The rationale for the high-strength stainless is simple: the high-strength steel rejects dents (a Tesla manager repeatedly whacked a sledgehammer into a side panel to prove that the electric pickup was dent-proof). Tesla shot itself in the foot during its introduction this week. Here is how it did it. The last stainless-steel body was in the DeLorean in the 1980s. John DeLorean’s designers used a stainless body on the poorly selling sportster. Elon’s design team used the high-strength stainless so that it would not only be dent-proof, but it would also last. Its F117-like angular lines also flow from a central pyramid out to reverse-cantered body panels and a high sail area that flows down to the tailgate. Honestly, it looks like a poorly designed boat.

And, there is a question that has been raised by a Torque News editor. Is it a truck an SUV. Our editor believes the Tesla is an SUV in truck's clothing.

But, enough of that. Here’s the reason for this particular item. It seems that during the introduction of the Cybertruck, Elon and company did something more than a bit underhanded to prove that the Cybertruck was better than the average Ford F150. The issue revolves around a tug-of-war between the Cybertruck and the Ford F150.

Some Deceptions Seem To Be Going On

If you look closely at the contest where the Cybertruck pulled an F150 uphill with its tires spinning, there are several bogus moves, starting with the site. The Cybertruck needed a brief moment to come up to speed before it began the truck pull. The F150 is on a downhill lie with the Cybertruck pulling uphill. What Elon and company don’t say is that the F150 is a standard rear-wheel-drive work truck. Under the conditions of the tug-of-war, the V-8-powered two-wheel-drive had its weight cantered forward onto its front wheels. Because the powered wheels are no longer in substantial contact with the road, the Cybertruck is essentially pulling a non-powered truck uphill. And, the Ford F150's 5-liter V-8 isn't a match for the power of the Cybertruck's electric motor. It's not just apples versus oranges, it is apple versus bananas.

Then, if you look at the tires on the Cybertruck they are massive, 37-inch offroad beasts with large patches in contact with the road. At once, you have four power focal points pulling versus none the other way. And, since EVs tend to weigh more than similarly sized non-electric vehicles, you have a pickup with lots of weight on the four driving wheels – did we mention the Cybertruck is all-wheel-drive. It is a significant apple versus oranges comparison and test.

Finally, you have the massive torque forces that the electric pickup can bring to each wheel – there were no specs mentioned in the Cybertruck’s intro last week – but the torque available to the Cybertruck was considerable. It is an advantage of an electric motor. The torque is immediate and significant. In this test, there probably were two electric motors as the Cybertruck was an all-wheel-drive version, and that, according to Tesla, means that it has at least two motors, one for each axle.

Given all of this deception, how could the tug-of-war be anything but a sham? No less a personality than Neil deGrasse Tyson, the spectacularly famous scientist, weighed in on this issue and pointed all of this out in a Twitter post the day after the contest.

Watch for news about Ford trucks here. You will also receive information about planned changes to the Ford F150, and other Ford F-Series trucks, as well as Ford Rangers and truck-based SUVs. Plus, there will be other information about Ford’s luxury division, Lincoln, and its SUV models.Click To Subscribe To Torque News YouTube Channel For Daily Ford and Automotive Industry News Analysis.

And, this is why Sunny Madra, Mobility X manager at Ford, tweeted his eagerness to take on the Cybertruck for another challenge.

Unfortunately, Ford, today hedged on the rematch as the company said that Madra’s tweet was “tongue-in-cheek.” So, why did the automaker reject the challenge? It is simple, To Ford, Tesla's challenge was like a mosquito bite on an elephant. It might have been noticed, but it was just disregarded. Ford doesn't have to be worried about any challenge Tesla could mount now because the automaker will sell five or six times the number of trucks than Tesla will over two years. It is no contest. Why would Ford need the bad press that accompanies a second problem event?And, don't forget Ford is also slated to bring out its F150 EV in 2021. It also doesn't need any shadow on that particular vehicle caused by a failed test. And, by just showing up, Ford validates Tesla's test, even if it is rigged. Why should Ford take the chance? It has been the country’s most popular pickup nameplate for the last 42 years. In its statement on this issue mentioned no reason other than the company is concerned with giving its customers all of the automaker’s attention to providing them with the best truck experience possible. Tesla's stockholders weren't too sanguine about the pickup, either. They did a number on the electric automaker's stock price as they were none too happy with the Cybertruck.

Despite Rejecting Challenge, Many Questions Remain

Still, there are too many unanswered questions about this whole tug-of-war issue, though, Elon’s Cybertruck is the default winner because Ford isn’t answering their challenge, after all. This leaves with the win and bragging rights. So far, Musk says that there are more than 200,000 preorders for his truck. Given that the Ford F150 line sells more than 1 million vehicles a year, Ford can claim the overall victory.

Do you want to know something? It is a shame because the apple versus oranges comparison nature of this issue seems to be crying out for an answer.

Tsingshan's Threat to Tesla: EV Maker Is In Battery Crosshairs
Tesla-Funded Research Reveals One of The Biggest Mysteries of EV Battery
END_OF_DOCUMENT_TOKEN_TO_BE_REPLACED