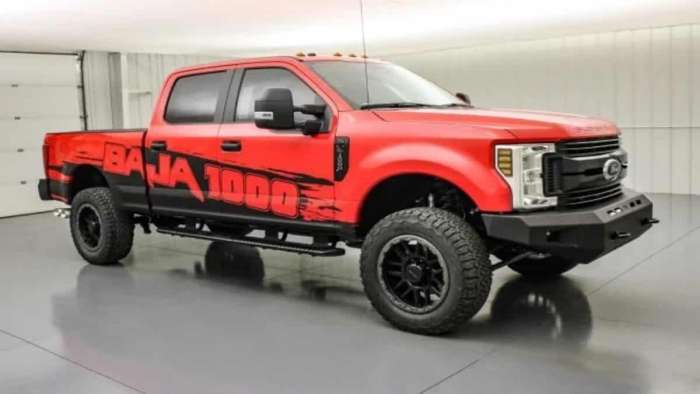 There are lots of powerful pickups out there, many prepared for sale by tuning shops. Well, how about a Ford dealer with its own tuning department that does this work. We have visited Long McArthur Ford before looking at other special models, today we look at the dealership's Ford F250 Super Duty Baja 1000. It is something you can get torqued up about, really.
Advertisement

When I worked in the car business a few years back, there was something that kept on surprising me. I managed an internet department that sold cars, and I have to say we did good business back then as we were one of the first to use it. What amazed me at the time was the number of phone calls and email requests we received after someone saw one of our vehicles online. They decided they had to have the vehicle. And, despite the often significant shipping charges, the customs duties, and everything else that applied, they made it happen, including shipping us some big checks. On receiving their checks, the wheels went into motion.

We prepared the vehicles and shipped them off. The vehicle prep included all the proper paperwork and documentation. In due course, the shipping truck appeared, hauling the vehicles off to their new homes or their ports of departure. For the most part, everyone was quite content with their long-distance purchases. Some of the vehicles received damage in shipping. However, the insurance paid for repairs. If it ended up a mechanical issue, then my dealership stood behind the vehicle.

The part that amazed me in the early days of internet sales was just how easily some buyers dropped thousands on the strength of the images we used. There were no such things as 360-degree walkarounds or super-enlargement of specific features just internet images. The trust folks had in us was fantastic and we repaid it with quality products.

It doesn’t amaze me anymore that folks are willing to fork over nearly $70,000 for topnotch trucks or cars that may be hundreds or thousands of miles away. When someone commits to this type of purchase, the customer desires the product and will spend whatever to obtain it. Take the Ford F250 Super Duty Baja 1000 pickup offered by the folks at Long McArthur Ford in Salinas, Kansas. Torque News has visited this dealership several times in the last six months to look at their retro Ford pickups., their Desert Defender, and Sidewinder pickup. And, then, there's the dealership's special special Ford F350 Ford Super Duty. Long McArthur is one of the few dealerships that we have run across with an in-house performance tuning department where they create their special trucks.

Once they receive the pickup, the performance department begins working on it, starting with a 2.5-inch lift kit. With the equipment installed, the mechanics then change to Fox 2.0 shock absorbers front and rear. They also swap the factory wheels for a set of Roush 20-inch Wheels that they equip with a set of BFGoodrich T/A KO2 35-inch All Terrain Tires. Long McArthur is a Roush dealer.

Continuing the upgrade process, Long McArthur installs an AFE Cold Air Intake with Tuner. This device takes the usually hefty output from the factory engine, 935 pound-feet of torque, and ups it. Generally, when the techs complete the upgrades, the Ford F250 Super Duty Baja 1000 will have between 1,000 and 1,060 pound-feet of torque at the crank. (This is certainly more than enough torque to pull out a few stumps, give or take). During the tuning process, the Ford F250 Super Duty Baja 1000 is put onto a dynamometer to check the exact amount of torque. Each truck carries Long-McArthur’s guarantee, as proven by a graph, that each pickup puts out all the power advertised, 1,000 pound-feet. (This is the reason for the name – Baja 1000 – as well.) The graph is part of the final paperwork.

After the performance tuning, the exterior guys go to work. They replace the bumpers with specialized ones that have Baja 1000 logos. The Ford F250 Super Duty Baja 1000 has LED fog lights up front. For offroad protection, the rear wheel-wells have liners. The exterior techs splash each side with Baja 1000 graphics. They also include touches like illuminated trim on the front fenders, a blacked-out grille, and front window tint treatment. The rear bed receives protection from a spray-in coat of Rhino bed shield. The upgrade includes a speedometer recalibration.

On the inside, Long McArthur replaces the standard trim cloth seats with leather-trimmed heated seats front and rear. The Ford F250 Super Duty Baja 1000 is a super crew model that features a full cabin.

And, bringing this full circle. If you want one of the specialized Ford F250 Baja 1000 pickups, you can contact them by phone at 785-823-2237 or on the internet. How you arrange to get it to your driveway, if you close on a deal, well, is up to you, though there are good national shipping companies out there. Each Ford F250 Super Duty Baja 1000 truck comes with a 3-year/36,000-mile warranty backed by Long McArthur. If you need to use it, contact the dealership and they will take care of the rest.

Currently, there are four Ford F250 Super Duty Baja 1000s in Long McArthur’s inventory in blue, red, metallic, and white. They are all available for $69,990.