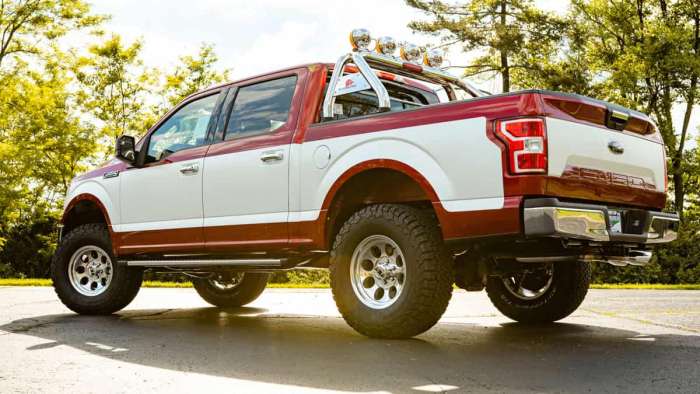 Return with us now to the thrilling years of the 1980s and 1990s when you could order and receive a very nice two-tone Ford F150. If you were to try that now, at least from the factory, you won't receive it. At least one dealer, though, has a very nice Retro program loaded and ready to go.
Advertisement

Ford has produced some of the neatest two-tone treatments in the auto industry. Look at any auto history listing where they show the 1956 Ford Convertible, and you will see how well done the two-tone look was. Though it was about 30 years before the same style treatment hit the Ford F150 truck world, when it did hit, the Ford F150s looked outstanding.

To put it into words, Ford used one color for the bottom of the vehicle, usually white or cream-colored, while pieces of the top and bottom of the Ford F150 were in a contrasting color. For example, we saw a 1994 Ford F150 recently that featured the cream/light blue combination that was striking. And, we saw another 1996 that used a cream/red combo that was equally, if not more, striking. How does it look to us? The look was awesome. One 1996 two-tone used the truck’s primary color, red, as a striking central emphasis with the contrasting cream not only standing by itself but also emphasizing the primary color on the body of the single-cab, standard bed Ford F150. Of course, the Ford F150 had been kept in meticulous shape by the owner, so the paint job was superb.

If you order the two-tone package from the dealership, you will find that it involves paint. To make the BFP Retro F-150, Beechmont’s shop uses a satin white vinyl body wrap material – the material is used regularly on vehicles that advertise businesses. The center section of the Ford F150 is covered in the vinyl wrap so that it creates a two-tone that looks amazingly like the originals of the 1990s. The dealership will make take any of its models and turn them into two-tone F-150s for you, but they do prefer the XLT or Lariat Chrome Package F150s as the base trucks for the retro look.

Of course, you would expect a few extra goodies with the Retro Package. It includes a 3.5-inch Ready Lift with polished Mickey Thompson 35-inch BFG All-terrain K02 tires. And, they add a Black Horse Bed Rack that uses KC Hi-Lites for a complete look. The dealership prefers the 5.0-liter V8 for the package as it installs a Roush Performance Cat-Back exhaust. This add-on gives the Coyote V8 its raucous engine note from under the hood.

On the other hand, if the owner wants the real performance to go with the retro looks of the BFP Retro F150, the dealership will bolt on either a Roush Performance Supercharger or a Whipple unit. Either one will give the V8 some bodacious power. Recently, the Roush Nightmare F150 set the record as the fastest production pickup. At that time, the Roush was putting 650 horsepower to the wheels, and your BFP Retro should quickly achieve the same number which should give you local bragging writes.

Pricing, according to the dealership, should be about $9,995.

Marc Stern is Torque News' Ford F150 Reporter. You can contact him at @iraradioguy. He can also be contacted via Facebook at mstern001