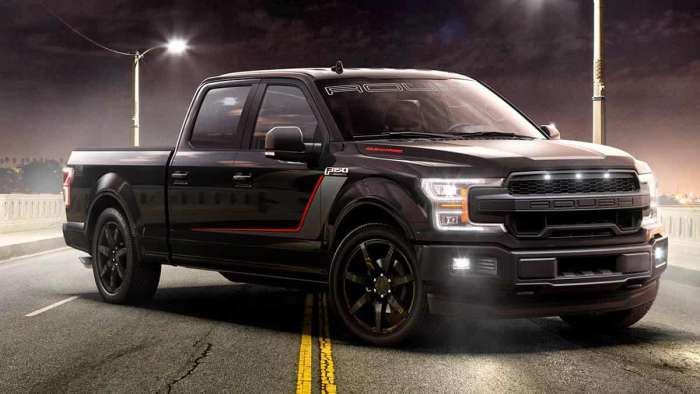 In the world of performance Ford trucks, one name stands out – besides the Blue Oval, that is – and it is Roush. For example, if you are thinking of a Ford performance truck such as the Ford F150 Raptor, the work done by the tuners at Roush also compares favorably. There’s little doubt about it.

So, if you were to hear that Roush was setting up at a local drag strip to run down a new quarter-mile pickup truck speed record, it would seem quite normal. And that is what the guys at Roush did recently. They took copies of their Roush Ford F150 Supercrew (SC) and the Roush Nightmare Ford F150 Regular Cab 4X4 models to the track as they sought to prove that they are the quickest accelerating pickups ever built.

The Roush Ford Nightmare F150 also features a sport lowering kit, special graphics package, 22-inch wheels, Roush grille, and a special Roush front bumper cover. And the trucks receive specialized graphics as well as customized interiors and it is possible that Roush iron may be joined by a Ford F150 Tremor edition.

According to the company, the Roush team mildly prepped the pickups for the acceleration runs. During the runs, Roush ran both pickups in Sport mode with the rear differentials locked. Also, the trucks carried lighter-than-normal fuel loads, and the team inflated the factory-equipped Roush tires to 32 psi. Recorded to the nearest tenth of a second, the Roush team recorded the 0 to 60 run times on a VBOX DriftBox.

Roush also said that it used an engineering test truck, the equivalent of a Ford F150 Regular Cab, in its quest to reach the quickest time on the Roush Ford F150 Nightmare Regular Cab model.

For those who may be interested, Roush Ford offers its Nightmare F150s – the SC and the Regular Cab – with three-year or 36,000-mile warranties. The warranties are similar to those offered by Ford as its factory warranty. The Roush Ford warranty is a nice feature.