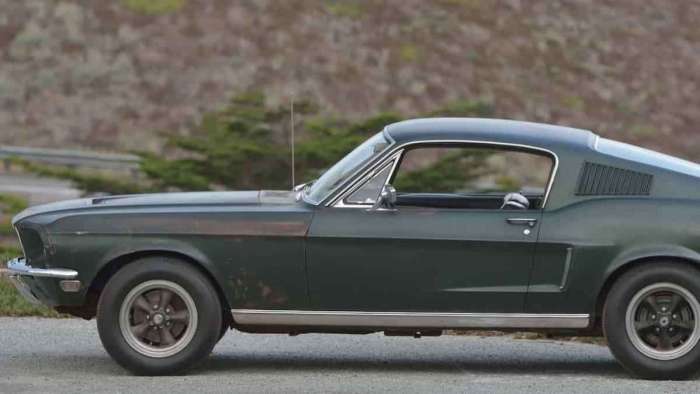 The Ford Bullitt 1968 Mustang fastback GT390, famed for the car chase scene, was sold on Friday for $3.74 million, setting a new Mustang record. Thus, one of the most important piece of movie-auto history has been sold at auction for a record-breaking price.
Advertisement

The other night I decided to watch an old crime movie, and wouldn’t you know that I pulled “Bullitt” out of the DVD library and threw it into the player. If you aren’t familiar with the iconic crime classic starring Steve McQueen, the movie is about a maverick San Francisco police lieutenant who is seeking the killers of someone he was protecting. McQueen did a great job in the co-starring role of this movie. The real star is the “Bullitt” Mustang.

The “Bullitt” Mustang, a 1968 Mustang GT390, became famous as the car that raced on the streets of San Francisco in a car chase that lasted over seven minutes. Indeed, every time I see the movie, I usually end up stopping, starting, and slowing down the pursuit to see if there are any nuances I have missed, but, by this point in the game, the movie, I have seen the half-century-old film more than a dozen times, so it’s unlikely I’ll find anything new.

The reason I was watching “Bullitt” was that the real Mustang, which had seemingly disappeared from the face of the planet until it surfaced a couple of years ago, was up for auction at the Mecum Auctions Kissimmee, Florida, site last week. Even before it put one wheel on the auction block, experts were saying that they expected the historic pony car was going to set a record. One expert even went estimated the ceiling for this iconic car could be $4 million.

Well, when the dust settled, and the numbers stopped whirring, the result was a record-setting $3.74 million. The new figure easily outpaced the former top money-making Mustang, a 1967 Mustang GT500 Shelby SuperSnake, that hit $2.2 million at a Kissimmee, Florida auction last year. It was quite a payday for the second-generation owner of the iconic Ford pony car. Torque News reporter Jimmy Dinsmore discusses the 2020 Shelby Super Snake.

The "Bullitt" Mustang easily rolled past the former top pony car auction a 1971 Hemi 'Cuda convertible that hit $3.5 million in 2014.

The exciting part of the story happened many years ago when the vehicle first sold. It went through two owners rather quickly until 1973 when the Robert Kiernan family of Tennessee entered the scene. Robert, who was to purchase the “Bullitt” Mustang and keep it out of public sight and knowledge for years, saw an ad in Road and Track’s classified section, offering the Ford product for sale. At that time, the “buff” books, R&T, Car and Driver, and Motor Trend, had extensive classified sections where many cars were bought and sold. It was before the age of the interne; eBay was still nearly 30 years from inception.

”Bullitt” Mustang History Has Some Intrigue

Following up on the ad, Robert purchased the Mustang for $6,000 and put it away in the garage on his property, where it remained for years. He kept the car, even spurning offers from Steve McQueen, himself, a noted motorcycle collector of the 1960s and 1970s, who offered top dollar for the “Bullitt” Mustang. But, there was no sale as Robert hung onto the ‘Stang. Robert’s wife reportedly used this Mustang as her daily driver to work until the clutch burned out in 1980. Then, the Mustang with only 67,000 miles on the clock, rolled into the garage where it was to remain undriven for the next 35 or so years.

Like reports of people seeing Elvis and Yetis, people said they sighted the “Bullitt” Mustang here, there, and back again. Each time authorities checked the “confirmed sightings,” they turned out to be, like UFO reports, mythical. The “Bullitt” Mustang never left its parking site, though the Mustang traveled with its family to New Jersey when they lived there for a time.

Two years ago, the “Bullitt” Mustang resurfaced. Robert Kiernan had passed on in 2014, and his son Sean became the owner of the pony car. Hegarty, an all-around firm with expertise in car insurance, valuation, analysis, and automotive experience, broke the story in 2018. The many sightings over the years were, like Yetis, mythical. The honest-to-goodness, real “Bullitt” Mustang was, in fact, alive and well and sitting in a Tennessee garage.

”Bullitt” Mustang Sold For These Reasons

Sean Kiernan decided to sell the iconic movie car this year. He told Hegarty that there were two reasons for selling the Mustang. The first was that “this is the way for my dad to take care of his family.” With the “Bullitt” Mustang, Kiernan noted that “we’ve been able to tell my dad’s story and share the car with the world.” He said it would be “hard looking in the garage and seeing an empty space” there. Sean made sure his family was there to see the auction as his mother, wife, newborn daughter, sister, and dog accompanied him. Indeed, Sean Kiernan and his family drove the Mustang to the sale where they watched it unfold.

According to Hagerty marketplace expert Colin Comer, the $3.74M result was right about where the car belongs in terms of value. “In my view, $2 million was definitely the floor, and $4 million was the ceiling,” he said. “It’s hard to know whether the two-year promotion campaign was ultimately helpful or hurtful, though. If it rolled right out of the garage in Tennessee and went straight to the block, would it have brought more? A lot of people would say yes. It’s been at all the premier car events in the last two years, which means you can unveil it to the world all over again. That matters in the car world, especially with a vehicle as historically as significant as the ‘Bullitt.’ It’ll always have the perks of being a cultural icon for the new owner, but with their name being associated with its historic reveal.”

McKeel Hagerty, chief exec of Hagerty, talked about the importance and meaning of the “Bullitt” Mustang. “Movie and TV cars have always been worth exactly what someone is willing to pay for them. But the ‘Bullitt’ Mustang has it all – a great chase scene, the McQueen connection, and a fantastic backstory. The fact that it disappeared for decades, only to re-emerge as an unrestored, move-car time capsule, is something we’ll likely never see again in our lifetimes.”

Kiernan concluded that “I think the emotional tie is probably more with the car, and all that’s happened these last few years, than with my father, specifically. He was more the at-home man, taking care of the horses, and that’s the tie I feel with him. The car – man, when I saw it in the glass-house, it’s been stored in down here – that was the emotional moment. This is the end. The closer.

Marc Stern
has been an auto writer since 1971. It was a position that filled two boyhood dreams: One was that I would write, and two that I write about cars. When I took over as my newspaper’s auto editor, I began a 32-year career as an automotive columnist. There isn’t much on four wheels that I haven’t driven or reviewed. My work has appeared in Popular Mechanics, Mechanix Illustrated, AutoWeek, SuperStock, Trailer Life, Old Cars Weekly, Special Interest Autos, and others. Today, I am the Ford F150 reporter for Torque News. I write how-to and help columns for online sites such as Fixya.com and others. You can follow me on Twitter or Facebook. Most of Marc's stories can be found at Torque News Ford coverage. Check back again and search for Torque News Ford Mustang news for more Mustang news coverage.

DON BJORKLAND wrote on January 12, 2020 - 6:20pm Permalink
I watched the bullitt go off, it was 3.4 million
Marc Stern wrote on January 12, 2020 - 7:26pm Permalink
With the hammer fees it comes to a total of $3.74. This comes from Mecum. That's the official price, not what someone is taking home from auction as the haul. From the New York Times: ‘Mona Lisa of Mustangs,’ Raced in ‘Bullitt,’ Sets Auction Record Steve McQueen’s hero car from a renowned Hollywood chase scene breaks expectations in a sale for $3.74 million.