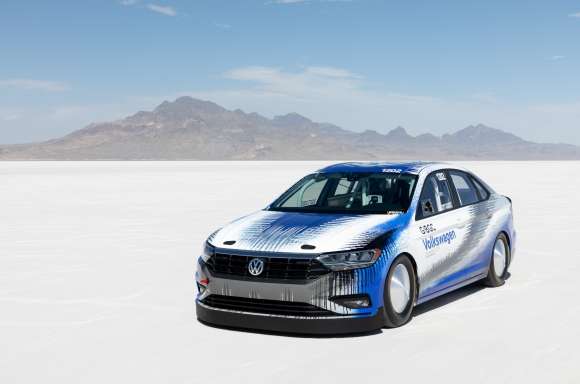 Volkswagen had a remarkable couple of days at the Bonneville Salt Flats this weekend as a 2019 Jetta, modified to run on the sands, set two new speeds marks.
Advertisement

A 2019 Volkswagen Jetta, running on the Bonneville Salt Flats in a USFRA World of Speed event clobbered two records, with one car over the weekend. The Jetta, taking part in a Utah Salt Flats Racing Assn. event recorded a track speed of 210.16 mph – 338.15 kph – on the Flats near Wendover, Nev. During the race, the Jetta also broke the Southern California Timing Assn.’s (SCTA) Blown Gas Coupe (G/BGC) class record of 208.472 mph.

Hinrich J. Woebcken, chief of VW Group of America (VWoA) was enthusiastic about the news. He called the speed a “demonstration of the quality durability, power, and efficiency of the Volkswagen TSI® engine series and the stability and aerodynamic efficiency of the all-new 2019 Jetta.”

He said that the record “underlines the sporty credentials of our all-new Jetta … and gives a hint at the future of the GLI model since this car uses a modified version of the GLI’s powerful EA888, 2.0-liter TSI engine.”

Prepared by THR Manufacturing, a Bonneville preparation specialist, the race showcased the potential performance of the EA888 engine, as well as the new Jetta’s aerodynamic shape. The sleek Jetta cuts through the air with a drag coefficient of just 0.27.

Significant Changes Made To The Powerplant

There were significant changes to the 2.0-liter TSI powerplant. The prep team installed new connecting rods, pistons, valves, camshafts, turbocharger, and exhaust system to the Jetta so it could run on the sand. However, the basic block and crankshaft remained stock. After all the changes were dialed in, the engine achieved an output of 600 horsepower at 8,500 rpm. The headquarters of THR is in Ventura, Calif.

To run at high speeds on the salt, the Bonneville Jetta had other changes. For example, the team lowered the suspension and fit unique Salt Flat wheels and tires at the corners. Finally, the prep team installed a limited slip differential for better traction.

The interior was stripped and outfitted with full track safety equipment. The list of safety equipment included a roll cage, racing seat, and a fire suppression system. Also, to help slow the car down, the Bonneville Jetta was fitted with a pair of parachutes.

Behind the wheel was Scott Goetz, a veteran Salt Flats racer, who was enthusiastic. “It was a terrific experience to drive this car on the salt. The car inspired a lot of confidence at very high speeds. I have no doubt that we could go even faster by running some more boost, but we are happy to have the record, knowing that there is more to come in the car if we need it.”