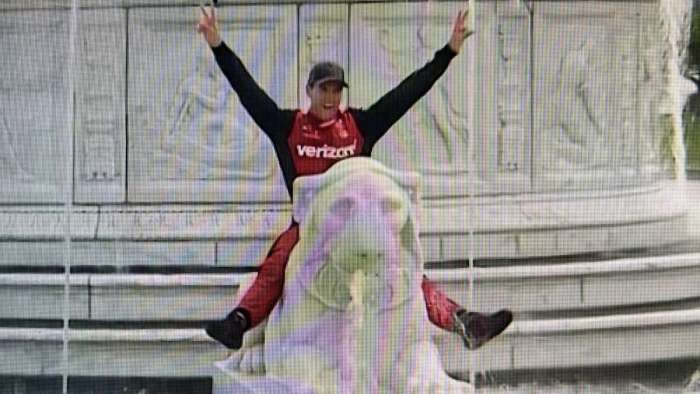 Cinderella has nothing on Roger Penske and Chevrolet. Team Penske wins the final Belle Isle Grand Prix before the race moves back to the streets of downtown Detroit.
Advertisement

When it comes to storybook endings, it is hard to beat the last Detroit Grand Prix on Belle Isle. Will Power drove his heart out and won the checkered flag for Team Penske and Chevrolet. No two entities have worked harder to bring racing back to Detroit than Roger Penske and Chevrolet. They were determined to return big-time racing to the Motor City. It seems only fitting that their teams would win the last races on Belle Isle before the race returns to the streets of downtown.

Will Power and his team jumped into the historic Scott Fountain on Belle Isle to celebrate. Power even jumped on one of the marble lions for photos. Again, a fitting end to the race’s 22 years on one of Detroit’s jewels. The Grand Prix committee has spent over $1 million refurbishing that fountain since 2007. It had fallen into disrepair and vandals had stripped the copper wiring. Even when the race returns to Detroit’s downtown, the Grand Prix committee has pledged to continue upkeep on the fountain.

Power nearly won a Belle Isle race last year, but after a late red flag stopped the race, Power couldn’t get his car to start to finish the race.

I have interviewed Roger Penske countless times and his love of the city of Detroit is paramount. He was determined to bring racing back to the Motor City. Penske spent his own money financing crews of workers to clean up the island as well as downtown Detroit, when the city was at its lowest point. For 22 years, the races called Belle Isle home. When racing first started there, much of the park needed improvements. Penske and later the Grand Prix committee oversaw the repairs to facilities on the island. They spent millions to improve the roadways, including the track. They restored the grandeur of the fountain and the Belle Isle Casino.

What a great moment for the Penske organization to win the final Indy race on the track and island that they have worked tirelessly to improve.

This victory was huge for Chevrolet, the race sponsor. This win gives Chevrolet its 100th victory since it returned to IndyCar competition in 2012. You could see GM’s massive headquarters, in the background of many of the race angles. Chevrolet has worked incredibly hard to keep the race on the IndyCar circuit. GM racked up another important win on Belle Isle as the Cadillac V Series won the IMSA race as well.

2023 Detroit Grand Prix Moves Back to the Street of Downtown

The last time the Detroit Grand Prix took place in downtown Detroit was in 1992. Today, race organizers ceremoniously drove Chevrolet Corvettes from Belle Isle to where the race will now be held to commemorate the move. Detroit Grand Prix Chairman Bud Denker said during the ceremonies “There are about 12 cities in the world that have downtown racing, and now we’re one of them.” I remember the old F1 races through the streets of Detroit. It helped bring the city to life. It will be easier for more people to be spectators. It should fill the downtown hotels and restaurants. It should be a win-win for the city, much like the final race on Belle Isle was a win-win for Team Penske and Chevrolet.