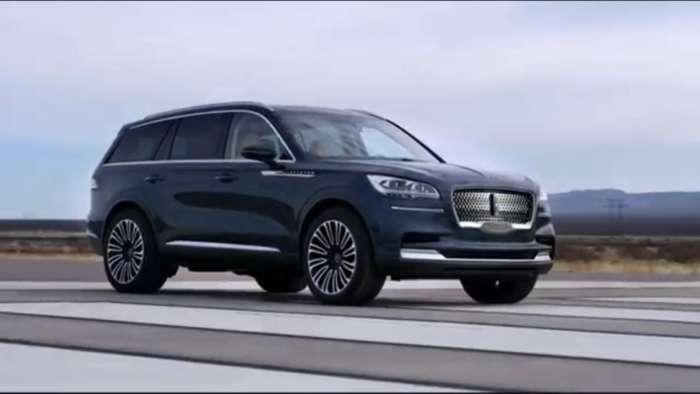 Why the Lincoln Aviator is Debuting at LA Auto Show

Lincoln is hoping to expand on the Navigator's popularity in 2019 with all new Lincoln Aviator. The California market is especially hot for the Navigator and the Aviator has new bells and whistles sure to please the energy efficient market.
Advertisement

Lincoln is about to debut the production version of the 2019 Lincoln Aviator, the vehicle that many call the “baby Navigator” at the Los Angeles Auto Show. The show is now called AutoMobility LA and the 2019 Lincoln Aviator is supposed to appear on November 28th. The timing is appears to be great. When Ford recently announced sales figures for October, demand for the Lincoln Navigator remained strong, with sales up 70.0 percent.

The 2019 Lincoln Aviator is considered a medium-size luxury SUV and it brings with it a number of upgrades that are perfect for the energy efficient markets like California. The Lincoln Aviator will be Ford and Lincoln’s first medium-size SUV with an advanced plug-in hybrid option. The option is expected to significantly improve the SUV’s fuel economy, although Ford is not yet releasing full numbers.

The 2019 Lincoln Aviator is a three row SUV, perfect for the millennials who have families, who want to be surrounded by luxury during their daily commutes, which are notorious in California. It will compete against the Land Rover, BMW and Mercedes Benz.

Automobility LA is the auto show that focuses on the “Green Cars” that are coming into the market. It highlights the most promising with the “Green Car of the Year” awards. It makes perfect sense that as Ford is trying to boost its portfolio of energy efficient and electrified vehicles, it would make this important introduction at Automobility LA.

The concept vehicle for the Lincoln Aviator made its first appearance at the New York Auto Show, where the automakers demonstrate to Wall Street that they have sound fiscal plans for the future. Ford has promised to have 40 hybrid and /or fully electrified vehicles by 2022. The 2019 Lincoln Aviator will be a giant step in that direction. It doesn’t mean that people will buy it, but Ford will have the option available.

Ford has other hybrid options available, but the plug-in hybrid is a first on their medium luxury hybrid. The Aviator will be built on a rear-wheel-drive platform, with a longer wheelbase giving the second and third row a little more room. The buyer will be given the choice of having a regular twin-turbocharged engine, or they can also add an optional plug-in hybrid to the turbocharged engine. The 2019 Lincoln Aviator will also be equipped with Lincoln Co-Pilot360, a group of the latest driver-assist technologies.

The 2019 Lincoln Aviator promises that it will have Lincoln’s quietest, smoothest drive, yet. It is also offering new technology that it sure to create a buzz. Lincoln is debuting a new technology called “Phone as Key” that will let owners use their smart phone as a key to start and drive the vehicle without a key fob. Owners will also be able to lock and unlock the vehicle as well as open the rear liftgate, all from their smart phone. The “Phone as Key” system will operate through the Lincoln Way phone app. If the phone is lost or stolen, Phone as a Key can be easily deleted, as a security feature.

Lincoln is also offering new technology to help drivers manage the dreaded potholes. Aviator will have advanced forward cameras scanning the road ahead, so Lincoln’s Suspension Preview Technology can adjust the suspension for upcoming road conditions, including the bone-rattling craters.

In its effort to provide a cocoon of luxury in the all-new Aviator, Lincoln commissioned the Detroit Symphony Orchestra to create unique chimes to be used as musical alerts. The musicians recorded symphonic chimes for about 25 features in the Aviator.

“This is quite a departure for us – introducing music into the informational chime world,” said Jennifer Prescott, supervisor, vehicle harmony, The Lincoln Motor Company. “But we’re always thinking about luxury, and this was a way to take Lincoln to an even higher level.”

Eventually, the new chimes will be used in other Lincoln models.