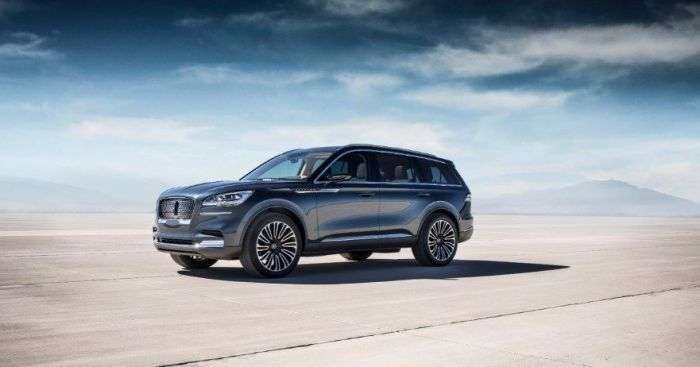 Can the 2019 Lincoln Aviator Take Off in the Luxury SUV Market?

The 2019 Lincoln Aviator flew into the New York International Auto Show this week. Can the sleek, new, rear-wheel drive SUV take off in the luxury segment?
Advertisement

Ford said it would be introducing a number of new SUVs before 2020 and the 2019 Lincoln Aviator landed for its first appearance at the New York International Auto Show. The new luxury medium size SUV promises an upgraded experience as it tries to take off in the premium SUV category, currently occupied by Land Rover, BMW and Mercedes Benz.

The 2019 Lincoln Aviator claims that it will have Lincoln’s quietest, smoothest drive, yet. It is also offering new technology that it sure to create a buzz. Lincoln is debuting a new technology called “Phone as Key” that will let owners use their smart phone as a key to start and drive the vehicle without a key fob. Owners will also be able to lock and unlock the vehicle as well as open the rear liftgate, all from their smart phone. The “Phone as Key” system will operate through the Lincoln Way phone app. If the phone is lost or stolen, Phone as a Key can be easily deleted, as a security feature.

Lincoln is also offering new technology to help drivers manage the dreaded potholes. Aviator will have advanced forward cameras scanning the road ahead, so Lincoln’s Suspension Preview Technology can adjust the suspension for upcoming road conditions, including the bone-rattling craters.

According to Joy Falotico, the new president of Lincoln Motor Company, they are hoping the 2019 Lincoln Aviator takes off, just like the Lincoln Navigator. “The Lincoln Navigator continues to turn heads and bring new clients to the brand. We believe Aviator’s elegant design, state-of-the-art technology and refined plug-in hybrid option will draw even more clients to the Lincoln showroom, including families who are looking for three-row capability.”

According to Lincoln, “The three-row Aviator targets the heart of the premium market, entering the medium luxury SUV segment that represents more than a quarter of all premium SUVs sold. Appealing to millennials starting families, with the majority of vehicles sold to people ages 35 to 44, the medium luxury SUV segment saw sales of more than 585,000 vehicles in 2017.”

Unlike the earlier Lincoln Aviator, that was just a slightly upgraded version of the Ford Explorer, the 2019 Lincoln Aviator truly draws inspiration from aviation.

The 2019 Lincoln Aviator appears wider at the front, then tapers back toward the rear of the vehicle. According to the Lincoln Design Director, David Woodhouse, the design is intentional. “If you look at a bird or plane in flight, the wing is always at an angle to the air and falling downward toward the rear,” Woodhouse says in a statement. “You see that in the main bodyline of Aviator. From the headlight to the taillight, there’s a beautiful undercut feature varying in depth that connotes poise and grace.”

The color of the new Aviator is described as iridescent Flight Blue. The new signature Lincoln grille that appears on the Navigator carries over to the Aviator.

The Aviator will be built on a rear-wheel-drive platform, with a longer wheelbase giving the second and third row a little more room. The buyer will be given the choice of having a regular twin-turbocharged engine, or they can also add an optional plug-in hybrid to the turbocharged engine. The 2019 Lincoln Aviator will also be equipped with Lincoln Co-Pilot360, a group of the latest driver-assist technologies.

Lincoln did not release pricing for the 2019 Lincoln Aviator, nor is it saying when the SUV will be arriving at dealerships.