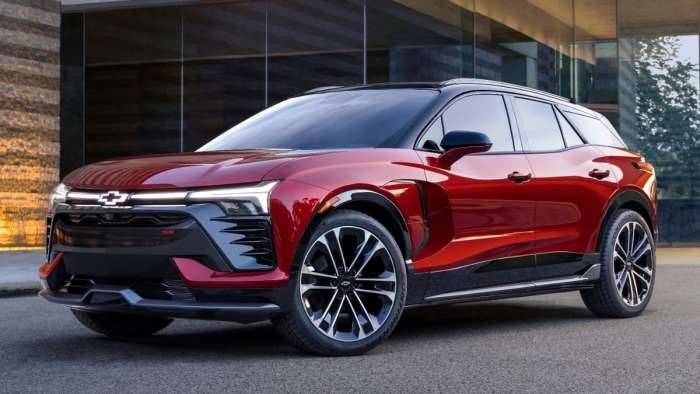 Why the 2024 Chevy Blazer EV is so Important for Chevrolet

The all-new 2024 Chevy Blazer EV will be revealed on July 18. Chevy needs the Blazer to be successful as a relatively affordable high-performance crossover.
Advertisement

The all-new 2024 Chevy Blazer EV will be revealed on July 18. The details on the new Blazer EV will be fascinating because the vehicle was developed from the ground up. Chevrolet is promising a groundbreaking mix of style, performance and technology. The most important thing about the photo that Chevrolet is now releasing is the SS logo on the front grille.

Chevrolet is promising a different level of performance for the all-new 2024 Chevrolet Blazer EV. The automaker is previewing an SS or Super Sport version of the SUV. This will be the first Chevy electric vehicle with the SS performance designation.

Chevrolet is releasing few details about what the Super Sport designation will mean for the crossover EV. The all-electric Blazer SS will debut in July, and be available in 2023 as a 2024 model.

This is the teaser video that Chevrolet released about the Blazer SS in March.

What the SS Designation Means

Super Sport, or SS, was the performance option package offered by Chevrolet on a limited number of its vehicles. All SS models come with distinctive "SS" markings on their exterior. The SS package was reportedly first made available for the 1961 Impala. There have been several other famous SS models like the Camaro, Chevelle, Impala and the Nova. A quick check of the Chevrolet media website shows that an SS version was still offered on the 2021 Chevrolet Camaro. The website did not list a 2022 version.

The Super Sport trim in the past has indicated special badging on both the interior and exterior of the vehicle, chassis reinforcements, stronger springs, shocks and upgraded brakes. Chevrolet is not indicating what the SS will mean for the Blazer EV. We’ll find out all the details in July.

Why the 2024 Chevrolet Blazer is Especially Important

Chevrolet needs to do something special to win over the current Tesla buyers. Ford has the Mach E, with the Mustang cache to impress people who want a crossover. Chevrolet needs to wow the crowd, to draw reluctant buyers into the fold. The Cadillac vehicles are stunning but expensive. Chevy needs to remind the potential EV buyers about Chevrolet and its dedication to performance and sports cars. Hopefully, the 2024 Chevrolet Blazer EV will have the superior performance to do it.